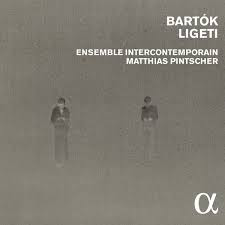 For today's post there is the famed Ensemble Intercontemporain under Mattias Pintscher performing high modern Hungarian gems by the likes of Bartok and Ligeti (Alpha Classics 217 2-CDs). The first CD covers Bartok's monumental chamber works, "Contrasts" for clarinet, violin and piano, and the "Sonata for Two Pianos and Percussion." They are breathtakingly performed by Jerome Comte on clarinet, Diego Tosi on violin, Sebastien Vichard on piano for the former work; Gilles Durot and Samuel Favre appear on percussion, and Vichard plus Dimitri Vassilakis on pianos for the latter.

The Bartok masterworks come to us in definitive performances, exciting, bold and idiomatic. I have never heard them done better.

The second disk covers later masterworks by Gyorgy Ligeti, namely his concertos for piano, cello and violin with orchestra, respectively. The exacting Ensemble Intercontemporain, which Boulez after all founded and honed to a precision vehicle of expression, do not fail to realize these three revolutionary works with all the drama and power of which they are capable. They are demanding pieces that call for the very best modern practitioners. Ensemble Intercontemporain do not fail.

The Piano Concerto has a rhythmic dynamism in the opening and closing movements especially taken on by the piano, and a fiendishly whirlwind part which is seconded and contrasted by the orchestra with great effect. Hideki Nagano handles the twist and turns of the solo part with great energy and exactitude, then handles the sometimes more delicate later movements with subtlety and impeccable phrasing. This is music that shows off Ligeti's brilliance and sense of color as it demands the same from the performers. It is a wondrous pairing on all counts.

The Cello Concerto is a bit more brief--two short movements. It begins in near silence, mysteriously, with cello and hushed orchestra appearing as if out of a mist, calling for a somber lyricism that builds, ebbs and creates atmospheric landscapes. Pierre Strauch handles the subdued solo part with a singing singularity, then awakens in the final movement to a more turbulent expression that breaks out of the quietude with pointed energy and finesse.

Jeanne-Marie Conquer has a great deal more business to take care of in the solo part for the Violin Concerto. It is a tumbling virtuoso and at times extraordinarily expressive part that the orchestra punctuates with that incredible Ligetian feel for orchestral color and texture. Heightened modernist drama is the substance of the concerto and Conquer sounds wonderful.

So that is in essence what you get with this significant double-CD offering. Masterpieces performed with sympathy, power and presence. Ensemble Intercontemporain are at their best, which means that the Bartok and Ligeti works get performances that are landmark. Anyone who wants to understand the development of high modernism and wishes to hear some major twentieth century examples in definitive performances, seek no further. Every work is a revelation and we are very lucky to have such a superb ensemble to give us the experience of the music on such a high plane.