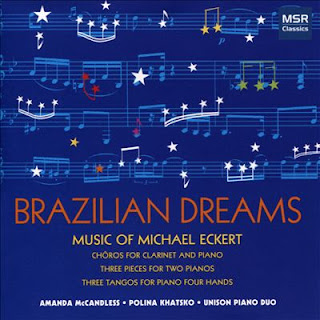 You could say that Michael Eckert (b 1950) is to Brazilian choros as Scott Joplin is to ragtime, though of course we should not forget about Villa-Lobos and some significant others that have come before. Nevertheless Eckert creates choros that have a kind a classic form, clearly articulated melodically and harmonically. Or that is my vivid feeling at least coming away from a number of listens to Brazilian Dreams, Music of Michael Eckert (MSR Classics 1549).

The program is played with convincing energy and sensitive articulation by pianist Polina Khatsko or the Unison Piano Duo for the four-hand and two piano works, plus Amanda McCandless on clarinet.

Michael Eckert was born in the US and has made his home here. He is not from Brazil. He started his compositional journey when younger with music in the modern classical idiom and only later fell in love with Brazilian choro.

The choro arose in Rio at the end of the 19th century, combining European sensibilities with Afro-Brazilian rhythmic  drive. Samba and bossa nova displaced the music in Brazil from the '50s on, yet it has undergone something of a revival in recent times.

Michael Eckert takes to the musical form with enthusiasm and a natural grace. The concert form of choros is the idea, music performed by western concert instruments for a concert audience. He makes no attempt to supercede those who have gone before him, instead letting his natural affinity for the form sing out nicely, with plenty of melodic invention and great presence.

The performances here are brightly and spritely moving, everything one would hope for, dynamic and rhythmically alive.  And the music keeps our attention in a lovely and refreshing way.

So by all means get this one for a nice change of pace! It is great fun and seriously good, too.