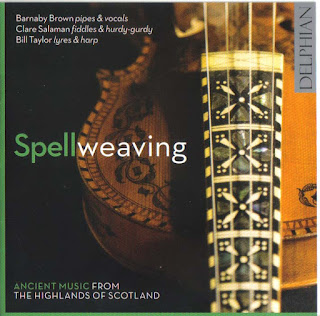 Colin Campbell's Instrumental Book 1797 contains an incredible wealth of traditional music from the Highlands of Scotland. It includes some 167 pieces, only four found in other sources. It was compiled and submitted when officials, fearing the loss of the traditions because socio-political upheaval in the Highlands put the transmission and performance of the music in jeopardy, offered prize money for submissions, transcriptions of the music. So Colin Campbell set to work transcribing the vast corpus of music he knew. But since the notation he used was in the local vocables of Hebridian "mouth music" the judges could not decipher it all and set it aside. There it languished, until now and Barnaby Brown's realization of the musical content.

The results are eight of the tunes played with authentic verve by Brown (pipes and vocals), Clare Salaman (fiddles and hurdy-gurdy) and Bill Taylor (lyres and harp). All this on the new release Spellweaving (Delphian / University of Huddersfield DCD34171).

This indeed is an important release on a number of levels, filling gaps in our Early Music knowledge with examples that may reach back hundreds of years before their transcription. The second important aspect is that the music is wonderfully interesting, and not as one might expect given the piper music that is still active in the repertoire there. These do not sound typically "Scottish" the way we have come to hear it.

And finally Brown, Salaman and Taylor have seen fit to realize the music on the pipes, yes, but also as sung in the traditional mnemonic syllabification as practiced then, and/or played on an ancient vulture bone flute, the 26-string Highland clarsach harp, wire-strung and gut-strung lyres, the Hardanger fiddle, medieval fiddle, and the hurdy-gurdy.

So we hear the music as it might have been heard in earlier times in various settings. The performances are excellent, the sound very good and the program something extraordinarily revelatory.

Anyone who cherishes early music will encounter a rare and exciting look at the heretofore mostly lost oral tradition in the Highlands region. It brings us something of what we are missing from the strictly notated musical heritage, a "folk" tradition frozen in time, an unearthing of an archaeological find, musically speaking, that speaks volumes. I hope they give us another round of this music, at least, since they but scratch the surface of the full holdings of Chris Campbell's Instrumental Book 1797.

This is an outstanding CD, as entertaining as it is revelatory. I highly recommend it to you.
Posted by Grego Applegate Edwards at 5:21 AM