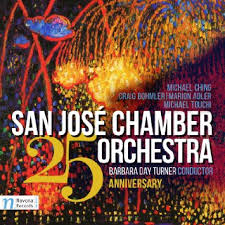 The San Jose Chamber Orchestra celebrates a quarter of a century this year with the release of 25 Anniversary (Navona 6031). On it Barbara Day Turner leads the orchestra through three present-day tonal compositions both varied and interesting.

Craig Bohmler in turn gives us a song cycle composition Saints (2002) based on the poetic lyrics of Marion Adler. It is about faith in its variant presence or absence in the human heart. The work features the extraordinarily powerful mezzo-soprano voice of Layna Chianakas, who is best in the more tender moments. Her forte can match the most powerful and dense musical outbursts, and perhaps there are times when you might find that a little more operatic than the work demands. But no matter. The cycle reminds me slightly of Barber's "Knoxville" with a kind of neo-Americana expressivity. The instrumental parts are nicely neo-pastoral in their lyric sensitivity.

Finally we get Michael Touchi's "Tango Barroco" (2001) with solo moments for William Trimble and Patricia Emerson Mitchell, on soprano sax and English horn, respectively. After a quiet introduction the music has some alternately stirring and cantabile contrasts that feature some beautifully interesting parts (beautifully played) for the wind soloists and, indeed, a kind of tango-meets-baroque quality that is delightful.

The orchestra sounds nicely committed and inspired under Barbara Day Turner's leadership. It is music of definite interest, some modern tonal gems you are not likely to hear elsewhere at this point and they give us something celebratory and fascinating in their own right. Hooray for the San Jose Chamber Orchestra and hooray for these well realized compositions!


Posted by Grego Applegate Edwards at 5:14 AM