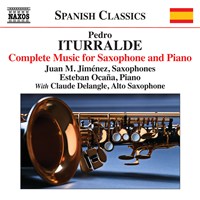 The music of Spanish composer Pedro Iturralde (b. 1929), as heard in his Complete Music for Saxophone and Piano (Naxos 8.573429), is both eclectic and original. Eleven pieces are performed with a lively and spirited demeanor by Juan M. Jimenez on alto and soprano saxes,  and Esteban Ocana on piano, expanded on one number by the addition of Claude Delangle on alto. All pieces are in new versions for world premiere recordings.

We get throughout in varying degrees the Spanish folk tinge, along with an Eastern European folk influence--on the "Suite Helenica" and the "Aires Rumanos." There is also a pronounced jazz influence that forms an important part of his style, as in "Tribute to Trane," "Jazz Waltz" and others. The jazz aspect may sound vaguely Brubeckian, foundationally McCoy Tyneresque at times, something perhaps of the Bill Evans harmonic wealth, but also with traces of earlier jazz styles, so perhaps a bit of Gershwin, boogie-woogie and such.

There are in addition two pieces for piano solo the composer felt it important to include.

The saxophone parts are singing, sometimes rather virtuoso oriented, but always a prime carrier of melodic line, with the piano part forming an indispensable accompanying role.  The liner notes mention the scarcity of available recordings of his work so this volume becomes even more worthy. All three performers studied Iturralde's style sets in depth before attempting these performances and it most certainly shows in the results. Both Jimenez and Delangle have beautifully projecting tones and Esteban Ocana gives us a bubbling exuberance in the piano parts, the combination bringing the music fully alive.

Iturralde comes across as a composer very much of his time and place, but not so much a modernist per se. This is music that takes on traditional Spanish, eastern and mainstream jazz tonalities and runs with them in a specially personal way. There is a kind of joyous demeanor to most of this music that one does not often counter today. If you set aside expectations and let the music have its way you are in for a very accessible musical ride that takes no shortcuts on musical substance and yet speaks with a straightforwardly infectious enthusiasm and tonal elegance. This is not meant to be cutting edge new music, but it succeeds via a kind of natural contemporary way, with a knack for vivid melodic songlike strains and lively rhythms.

Nicely done! It may well be essential listening for those who seek full coverage of contemporary Spanish new music or the saxophone repertoire, somewhat less so but very pleasantly so for others.
Posted by Grego Applegate Edwards at 5:29 AM