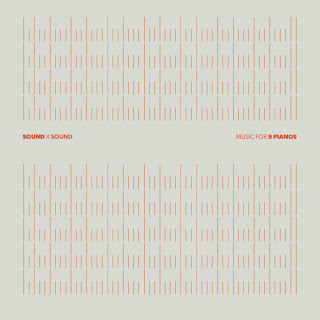 Composer Niels Lyhne Lokkegaard has been doing a series of short compositions, each released on a 7-inch vinyl pressing. The "Sound X Sound" series is devoted to the gathering of a particular class of sound generators to form an ensemble that then plays minimal mini-sequences that concentrate on a particular class of sounds repeating in a kind of musical cloud of ebbs and flows, something like the sound of an orchestra of crickets on a spring or summer night. I've covered the first two here, one for recorders, another for an orchestra of digital tuners.

Today we have the third volume, Music for 9 Pianos (Hiatus 014). It continues where the others leave off. The amassed sound of the pianos is slightly less startling than the recorders or digital tuners, because we've been exposed to multiple piano sounds before, though not quite like this.

"Descending Piece," occupying side one, is devoted to rapid downward moving glissandi, first in the upper range, then the lower. "Partial Piece" (side two) gives us a series of sustained, gradually decaying note clusters, then a swarm of repeated notes.

Lokkegaard succeeds in giving us a sort of unidimensional sound world once again, two short pieces that have a unified series of objectives that in their brevity and singleness of purpose carry the day.

You may want to begin with the recorder or tuner volume first, but together all three capture our aural imagination quickly and then as quickly they are gone.

Recommended for those who would appreciate an uncompromising sound stage of unified aural clouds. More volumes are apparently in the offing. Give a listen!
Posted by Grego Applegate Edwards at 5:05 AM