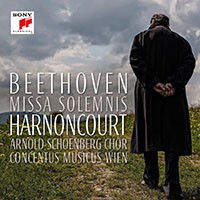 Many years ago when I was still young I received a couple of tickets to hear Beethoven's Missa Solemnis as performed by a reputable organization at Carnegie Hall. I invited a young lady to accompany me and we listened carefully through to the end. "Well," I asked after the last bars and applause were over, "did you like it?" "No," she said matter-of-factly. "Come to think of it," I said to myself, "I didn't much like it either." I had a number of recordings of it but never seemed to connect. Years later, looking back, I realize now that it is one of the more difficult Beethoven works, like an endless version of the finale to his 9th, only lacking in an abundance of the sort of riveting thematic material that Beethoven thrived upon. There is much to appreciate, regardless, but only a performance of absolute perfection convinces.

Nikolaus Harnoncourt didn't come to mind as one of the potentially great "Solemnis" conductors in the past. But somehow he overshadowed most everybody else in July 2015 in a live performance at the Styriarte Festival in Graz. With him were a distinguished cast of soloists, the Arnold Schoenberg Choir and Concentus Musicus Wien. Luckily it was well recorded, and we now have it out on CD (SONY Classical 88985313592). It was to be Harnoncourt's very last recording.

Every phrase seems hand-sculpted, designed sonically to express Beethoven's intent. The choir rings out ecstatically, the soloists are dedicated, the orchestra neither fades away nor is overly dominant.

It is a live recording, so that one might imagine a second take on some passages, not many though.

It is a wonderful tribute to one of the prime musical masters of our times. It is neither bloated nor overly lean in sound. It is a moving farewell to the Maestro, and it may make a Missa Solemnis convert out of you. I think it managed to confirm that for me!

Strongly recommended.
Posted by Grego Applegate Edwards at 5:12 AM