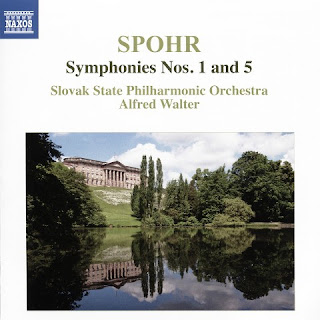 If you aren't familiar with the symphonies of Louis Spohr (1784-1859), you are not alone. He wrote ten in all but we in the modern era do not get much of a chance to hear them. Alfred Walter and the Slovak State Philharmonic Orchestra recorded the cycle in the '90s for Marco Polo Records. Naxos is reissuing them, with the first just out, covering Symphonies Nos. 1 and 5 (Naxos 8.555500).

The first (1811) was modelled after Mozart and has classical brio, thematic distinctiveness and creative orchestration.

The fifth (1837) is more early romantic, melodically expansive and praised in the day by Robert Schumann. It began as an Overture to "The Daughter of the Air,"  which in rewritten form became the first movement to the symphony. At the time the 5th was recognized by critics as a work of great stature. Though written in the shadow of Beethoven it manages to convey a rich originality and real melodic strength.

The performances are quite respectable, with excellent spirit and detail.These are symphonies that trod untypical ground and do so in ways that please. An auspicious beginning!
Posted by Grego Applegate Edwards at 5:04 AM