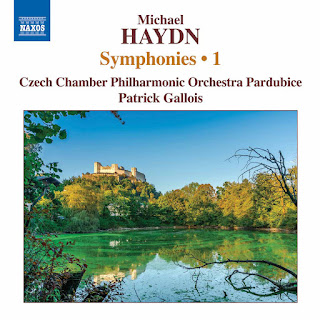 When you think of Haydn and symphonies, the mind generally zeroes in on Joseph Haydn and his hundred-odd beauties. We sometimes forget about his younger brother Johann Michael Haydn (1737-1806) who was in his day much admired and composed prolifically in the symphonic mode, with more than 40 Sinfonias to his credit. Naxos has begun a series of them with the inaugural Symphonies 1 (Naxos 8.573497), as played with a good amount of zest and brio by the Czech Chamber Philharmonic Orchestra Pardubice under Patrick Gallois.

The four works represented here were composed for the Salzburg Court in the 1780s, where Haydn served as Konzertmeister for most of his life, much to the consternation of Leopold Mozart, who never got the position as a result. Young Wolfgang Mozart developed a great appreciation of the composer and modelled some of his works after him, so much so that several of Michael's sinfonias were for a time thought to be by Mozart, including the "Sinfonia in G" (Perger 16) which begins this program.

The works in volume one have that rococco energy and charm that prevailed in the era. They were meant to be played by a smaller orchestra typical of Salzburg and the Czech organization appropriately sizes its orchestra to fit the performance practice of the time, including a harpsichord in the basso continuo mode.

You should not expect the proto-romantic dramatics of Mozart and Joseph's last works. These are perky and slightly less involved in terms of part writing and thematic complexity, but that was indeed the way things were then and he was very much an important exponent of the earlier style. The music has great appeal in any event. All but one (the "Sinfonia in A major," Perger 15, which has four movements) are conceived on in the three-movement form that prevailed (the A major sinfonia adds a minueto 3rd movement, which of course eventually became standard).

The works are on the whole nicely inventive, rich in orchestral detail, and very spirited. Those who already know and love early Mozart, Joseph Haydn, and CPE Bach's works of the period will take to these readily.

Compositions and performances are well matched for a very stimulating and pleasurable program. A promising start to a series that should enlighten us significantly.

Recommended!
Posted by Grego Applegate Edwards at 5:37 AM