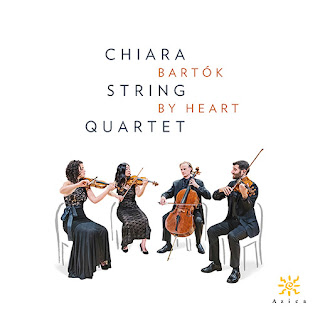 I believe I've said this before on these pages, but it is nevertheless true that as some early modern classics have become more and more familiar to us all, keenly discerning younger musicians seem more inclined to take the music as whole cloth. They understand the music much better than many of their predecessors did--as they have learned to speak fluently the language of modernism from a young age, as "native" speakers, and they make it all sound like a natural expression, which by now of course it should be.

This is no more true than in the case of the Chiara String Quartet, who give us such beautiful renditions of Bartok's complete String Quartets that you think they themselves wrote them. Bartok By Heart (Azica 71310 2-CDs) is what the title suggests. The Chiara set about memorizing all six quartets and then finessed the details thoroughly. This is the recorded result.

Those results are stunning. These are the quartets the way Bartok envisioned them, one feels as one listens. The early quartets are not overly romantic, the folk elements sound as they might have inside Bartok's head, as truly folk-like, the modernisms are not just technically right, they are phrased naturally and with great spirit.

The Bartok Quartets have long had the reputation as some of the very finest of our times, indeed of any era. The Chiara String Quartet bring you the WHY of that perhaps as never before. It's a product no doubt of the group realization process once they had memorized each quartet--to then concentrate on the four-way expression of the implications of the notes beyond merely getting it all right. There is an incredible togetherness and spirit expressed that make all the complexities seem inevitable, that give the feeling of genuine performative spontaneity, that musicalize each movement well beyond the abstractions they no doubt are. Chiara adds the cognizant connecting tissue, so to speak, the syntactical logic, that gets to the essence of what Bartok is saying.

It is a performance not likely to be surpassed in the near future. It takes the ALL of Bartok and reflects upon it with loving care and attention. This is a release everyone should hear! Superb!
Posted by Grego Applegate Edwards at 5:23 AM