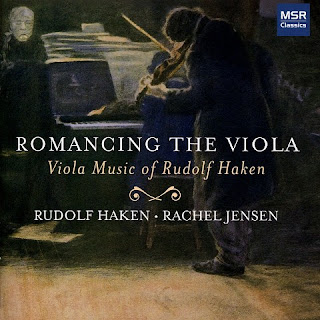 If a bit of stirring modern neoclassical-neoromantic chamber music for viola sounds like something you'd appreciate, there is Rudolf Haken (b.1965) and his album of compositions entitled Romancing the Viola (MSR 1069). Rudolf plays the viola quite well and Rachel Jensen seconds him nicely on the piano for those works (four of five) that are scored for viola and piano.

This is well-crafted, well-played music that has some of the expression and passion of early last century, yet also sometimes is modern neo-classical in a way that has something of the sophistication of Hindemith but remains original nonetheless.

These are works with memorable thematics, well constructed compositional form and a touch of virtuoso kinetics.

I found after listening several times that Haken wears well on the ears. He may not be destined to be inscribed in the stars, but he has his own voice that brings complexities into the mix yet has an appealing lyric panash.

This is early Haken, music written while still in his teens for the most part--and that is rather wonderful given the maturity of the music.

Try this one out and you may well find it quite worthwhile. Refreshing!
Posted by Grego Applegate Edwards at 5:41 AM