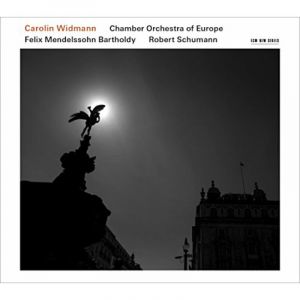 There was never any doubt that Mendelssohn's "Violin Concerto" was a towering masterpiece of his era. Robert Schumann's concerto offering met another fate at first. Violin virtuoso Joseph Joachim spurned it. It remained unperformed until 1937, and it was not until Yehudi Menuhin championed it that it became better known.

But even today it is relatively unsung.

Enter Carolin Widmann and the Chamber Orchestra of Europe with a new recording of both concertos (ECM New Series 2427).

The Mendelssohn gets a sweet and crisp treatment, with attention to the soaring melodies and sweeping scope. Is it as good as the old Heifetz version? No, but it does stand on its own for a well-rounded and thoroughgoing completeness.

And then the Schumann. What a surprise! It is thematically and theatrically alive, perhaps not quite as stunning as his "Piano Concerto," but in every way a work to be celebrated, virtually a "lost" Schumann masterpiece. Perhaps Joachim was expecting more virtuoso fireworks? In the end you don't miss them because you get the gloriously searching Schumann mysterioso touch.

Widmann and orchestra make it all ring true. They give it a fully majestic realization, fully sounding out, first-rate Schumann all the way.

So even if you have the Mendelssohn, this recording will give you a contrasting view. The Schumann, though, is a revelation. It will bring joy to all Schumann fans, all seeking something unheard and ravishing. Widmann gives it her all. Bravo!