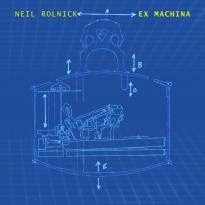 Electroacoustic music these days comes in many forms, from the hyperstructured formalist sort that shows a rigor of concept to the more intuitive, improvisational. Today's two-CD set by Neil Rolnick veers more toward the latter pole. Ex Machina (Innova 950) showcases five works that delight in the tranformation of recorded instruments and vocals without losing sight of the idea that the finished product is something deliberately composed.

"Silicon Breath" features sax improvisations by Ted Nash that are subjected in real-time to electronic transformations by Neil on the laptop.

"Wake Up" is based on samples of the Everly Brothers' iconic recordings of "Wake Up, Little Suzie" and "All I Have to Do is Dream." The special sound of the acoustic guitars and the brothers'  vocal style remains intact as Neil subjects snippets to re-harmonization and rhythmic permutations that gradually become rather uncanny in their scope.

"O Brother!" takes his brother Peter's rendition of "Shady Grove" and other traditional folk tunes sung and played on the banjo and subjects them to elaborate permutations with a constant kind of dialectic between tape source and degrees of transformation.

"Cello ex Machina"  gives cellist Ashley Bathgate  the chance to compose a kind of orchestral transformation of her cello by manipulating the sounds via laptop in real time.

"Dynamic RAM & Concert Grand" puts Katheen Supove through some exacting pianistic paces which fit into a groove and are at the same time diced and rearranged by Rolnick's computer manipulations.

In the end we have a set of electroacoustic tapestries that have an immediacy and ever-permutating spontaneity that are rather at a remove from the music-in-laboratory feel of much of the first electronic music works. Here there is a real-time, performative ethos that is as playful as it is serious. Just as the splicing of tape and careful filtering and rearranging that the first electronic works operated within was not a guarantee of worth, so today the various methods and softwares that allow live transformations via a laptop do not automatically create musical value. That of course comes from the creative imaginations of composer and performers.

It is Neil Rolnick and his collaborators that make this program very worthwhile, in the end. And for that reason I do recommend that all with an interest in electroacoustics hear this. It is fun and serious at the same time! Kudos!