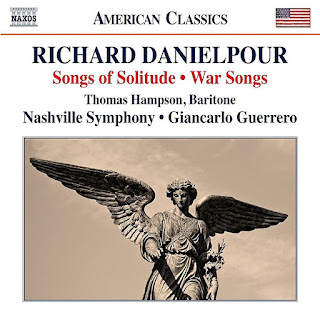 Richard Danielpour (b. 1956): like many others I have appreciated his music in the last decades. His recent album Songs of Solitude / War Songs (Naxos 8.559772), a set of poetic soliloquies, two song cycles for baritone (Thomas Hampson) and orchestra (Nashville Symphony under Giancarlo Guerrero), stands out as especially memorable and lucid.

"Songs of Solitude" (2002) was written in response to the anguish the composer experienced in the wake of 9-11. It is based on poems of W.B. Yeats. The music like its counterpart here has a sort of genetic lineal relationship to Hindemith's important song cycle "When Lilacs Last in Dooryard Bloomed," which set Whitman poems on the death of Lincoln to mourn the demise of FDR. Like that work there is a lucid orchestral backdrop that responds to the vocal strains.

The music is in no way derivative, however. Both vocal line and orchestral dialog are singular, alternately resigned and inward looking with dynamically jazzy contrasts that exude with a kind of post-Bernsteinian panache.

"War Songs" (2008) continues with a regretful, somber view of war and its aftermath, based on Walt Whitman's Civil War poems. It was commissioned by the Nashville Symphony to mark the 150th anniversary of the end of that war.

Like "Solitude" it is filled with marvelously poetic orchestral responses to the moving text and its artful declamation by Hampson.

As a kind of encore we get the short, lively and upbeat orchestral work "Toward the Splendid City" (1992) which ends the program on a positive note and extends our appreciation of Danielpour's winning orchestrational brilliance.

This is vivid music, subtle tonal-modern tour de force expressions, the main works heartfelt reactions to two of the most difficult historical periods in the USA.

Performances are exceptionally well-wrought, detailed and strong. The sound is excellent. The music unforgettable.