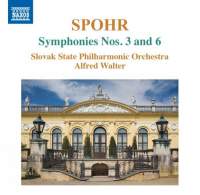 The Spohr (1784-1859) symphonies series (originally released on Marco Polo in the '90s) continues to come out on Naxos. We are up to, I believe, the third volume, with a coupling of Symphonies Nos. 3 and 6 (Naxos 8.555533), again with the very capable team of the Slovak State Philharmonic Orchestra under Alfred Walter.

The Third contrasts nicely with the Sixth. As the liner notes tell us, Spohr at the time of the Third (1828) was at the height of domestic and professional fulfillment, with a beloved wife and a solid reputation as a composer seemingly destined to carry on in the wake of Mozart, Haydn and Beethoven. The Third reflects a confidence and a mastery of a man sure of his powers and direction, with four impressive movements filled with inventive thematic material and a masterful handling of the orchestra.

By the time of the Sixth (1839), he had lost his wife and daughter to illness. The revival of early music had flowered, especially in the figures of Bach and Handel, and Spohr set about in the Sixth to reflect on the influences of past masters on his own outlook, at the same time perhaps looking back to a happier time in his life.

So there are movements showing style influences of Bach and Handel (the first movement), Haydn-Mozart (the second), Beethoven and the first wave of romanticism (third movement), and then in the final movement a rather bizarre parody of the music of the "very latest period," where Spohr roasts all that he saw as flashy and superficial in his time, for example as the liners tell us, the music of Auber and Adam. It is a kind of musical joke inserted into an otherwise sublime and exquisite score. It puzzled his contemporaries, but listening now we hear the finale and its sarcasm without undue shock. It does not so much mar the symphony as it offers an eccentric, frustrated gesture of despair over the times he lived in as a sort of postlude, perhaps a kind of expression of his state of mind during that period.

And in the end neither symphony offers perfection so much as shows us a rich musical mind in fully productive effervescence. These symphonies (and perhaps the sum totality of them as realized by Walter) will awake you to a symphonic master who is much better than his present-day reputation would indicate. The coupling of Symphonies Three and Six is especially attractive as are the performances.

If you wonder about Spohr this is a great volume to begin an exploration-expedition.