George Lewis, The Will to Adorn, International Contemporary Ensemble 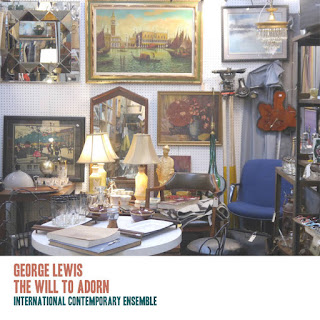 Of all the avant jazz artists who have turned to new music composition, trombonist George Lewis is among the most rewarding and successful. He started as a key member of Chicago's black collective AACM (Association for the Advancement of Creative Musicians) and then saw greater exposure as the trombonist in Anthony Braxton's breakout small group. He was an important component of many avant jazz ensembles that followed, including his own groups, ended up a professor at Columbia University and is now Vice-Chairman of the music department, where his interest in electronics and experimental new music composition as well as his continued involvement with avant improvisation have found an institutional outlet and ever-increasing recognition.

Some of his vibrant new music compositions are given near ideal performances by the International Contemporary Ensemble on a new CD entitled The Will to Adorn (Tundra New Focus Recordings 005).

This is beautifully contrapuntal new music that preserves the pointillist and timbral liveliness of the best avant jazz ensembles and transposes it all into written works that demand precision and commitment to an expression at once Afro-American as well as international.

"The Will to Adorn" (2011) leads off the set with a putting into musical terms what Zora Neale Hurston named as a primary characteristic of Afro-American expression in a 1934 essay. Dr. Lewis achieves in beautiful ensemble intercomplexities what Hurston described as a "decoration of a decoration"--in nearly infinite spilling over of counterlines on counterlines. ICE brings it all to us in exciting ways.

From there we experience three more chamber works that vary the musical utterances and instrument combinations but stay within a super-variational context. And so we hear and appreciate "Shadowgraph, 5" (1977), "Artificial Life 2007" (2007), and "Born Obbligato" (2013), exciting ventures into the new.

To top off the program George Lewis's unaccompanied trombone has a solo highlight on composer T. J. Anderson's "In Memoriam Albert Lee Murray" (2013), the latter a writer of insight into Afro-Jazz topics. The jazz tradition is encapsulated and celebrated in this short work, which reminds us of course what an excellent artist Lewis is in the instrumental realms.

And so we come to the end of a beautifully composed and executed volume, giving us pause and good reason to consider George Lewis as one of our leading American composers today. Any modernist follower, modern Afro-jazz fan and new music champion should find this music as I did, vital, extraordinary and a beautiful listen.
Posted by Grego Applegate Edwards at 6:10 AM