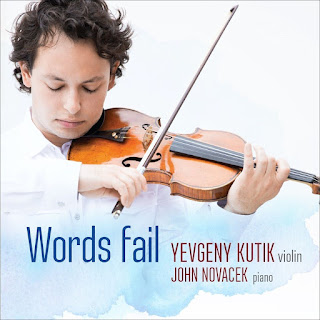 Those who are actively inclined toward music have experienced pieces that somehow go beyond what words alone can express, leaving a palpable something behind that has great meaning. So-called serious music, classical or jazz especially, does this exceptionally well.

I have a relative who can only appreciate music with lyrics, songs. This essentially closes her off to the most sublime moments that music can give us.  That is sad. What such people miss! Of course (and thankfully for the rest of us) those more dedicated to musical arts know and grasp the deeper communicative levels instrumental music can convey. We are the lucky ones and I thank the heavens every day for that. We can appreciate the musical equivalent of "tweets" (when done well) or the complexities of a long musical "novel." There is so much more available to the sensitive listener and you are my audience, surely.

Violinist Yevgeny Kutik and pianist John Novacek have put together a wide-ranging program of duos which communicate in this way on the album Words Fail (Marquis 774718147721). The results play themselves inside your head with varying degrees of urgency, but all "say" something profound with notes alone.

We begin auspiciously with three of Mendelssohn's "Songs without Words" arranged for violin and piano by Friedrich Hermann. These are paradigms of song forms that use melody alone to communicate moods to the listener, and in so doing leave a distinct impression.

Next up is the Adagio from Mahler's "Symphony No. 5," a heartfelt, searchingly poetic utterance that when translated to violin and piano by Robert Wittinger seems all the more direct.

Two world premiere recordings follow: Michael Gandolfi's "Arioso Doloroso/Estatico," a very expressive mood piece for unaccompanied violin; and Timo  Andres' "Words Fail," which winds itself out as a central rhythmic motif joins a varying sequential melodic-harmonic pattern that seems perhaps melancholy or regretful but is complicated by its non-literal nature.

Tchaikovsky's own "Song without Words" (here arranged by Fritz Kriesler) has like Mendelssohn's series by that name a definite litero-evocative subtext that one senses gladly.

Following the program we next hear Prokofiev's rather rare "Five Melodies, Op.35bis." Prokofiev nearly always strikes me as a musical mind that can via instrumental utterance communicate intricate, multiple feeling complexes quite beyond verbal description. That is much the case with these five movements. Wonderful music to hear!

Further on in the modern zone is Messiaen's "Theme et variations," with his own complex rhythmic-melodic-harmonic sense, creating meaning with fully dense language that goes far beyond the verbal. Kutik comes through with an especially inspired performance.

Lera Auerbach, a living force in composition and string playing whom we have familiarized ourselves with on an ECM recording a couple of months ago, makes a lovely appearance with her "T'filah (Prayer) for solo violin."  The musical-speech aspect of this work is pronounced, though of course we get no voice nor verbal equivalence. It is haunting.

Kutik's sweetly expressive power on the violin is exactly what all this music demands. He never flags but soars and whispers his way through the music like the young master he is. John Novacek (and Timo Andres on the title piece) give pianistic structure and a unwavering poetic concentration as perfect foils to Kutik's eloquence.

This program comes at you like a breath of springtime air, just sweet enough to evoke complex associations but never evoking outright sentimentality.

Well recommended!
Posted by Grego Applegate Edwards at 6:01 AM