Tod Dockstader, From the Archives 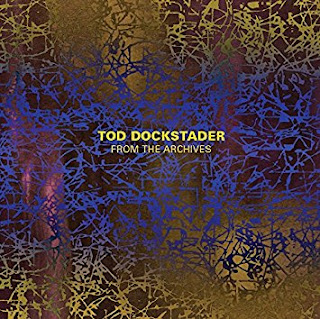 From 2005 to 2008, in the waning years of his life, American electronic  music titan Tod Dockstader (1932-2015) worked out some vibrant ideas in his studio. They have been culled from thousands of files he left behind, chosen for their provocative, yet relatively finished state. No doubt Tod might have sequenced these or in some other manner tied some or all of these into a long-form work, but then again they each have the completeness of a member of a set of preludes or etudes, nocturnes or what have you. In the form of 15 short works that in various ways share a certain trajectory, timbral fullness or directionality they do not in the end sound tentative as much as microcosms in a last cosmic macrocosm.

One is struck upon repeated listenings with how very musical these pieces are. Everything has complexed pitched relations with everything else, and the timbral contrasts and confluences make for near symphonic chamber resonances.

Tod has always been a master of transformations. In the end each sound complex defies simple reduction to a set of sources, just like a finished score in performance, when of a high caliber, speaks wholly and timelessly without concern for the real-time creation of each vertical or horizontal phrase.

You accept it as each a one and each a complete sonic utterance, even though  Dockstader might well have applied additional combinatory logics on what we have as the whole.

The richness of extraordinary sound takes over your listening consciousness with vivid and continuous sound imagery that in the end maintains a poetic totality. Wonderful music, this.

Tom Steenland and his Starkland label are celebrating their 25th year as a continuously active presence, a bellwether for what directions new music  has taken over these epochal times. Tom himself has notched 40 years on his belt as producer of new music, so it is a double-milestone year.

Like the purveyor of a cutting-edge art gallery, Tom has had an enormous influence on what we recognize as new and pathbreaking. Sample his extensive catalog and worlds will open unto you!

We salute the Starkland label on their 25th, and Tom himself on his 40th!
Posted by Grego Applegate Edwards at 6:09 AM