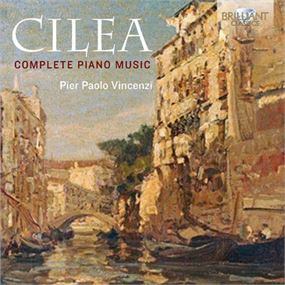 The piano music of Francesco Cilea (1866-1950) has been virtually absent in our times from the concert hall, the publishing house and the recording studio. Until now and Pier Paolo Vincenzi's  performance of Cilea's Complete Piano Music (Brilliant 2CD 95318). The totalized oeuvre spans the time period from 1883 to 1930. The early works reflect influence of the romantics, notably Chopin and Schumann, but the mature period is another matter. Vincenzi in the accompanying booklet notes Cilea's Mediterranean melodic approach and we can hear increasingly as Cilea matures a mastery of contemporary European harmony, the influence especially of Debussy and the impressionists.

In his earliest work he preceded the Italian instrumental masters of the early-to-mid 20th century by a number of years. Hearing all the works in one place here we encounter affable company, a lyric element, a sturdy character to most pieces and some that show an exploratory sense of adventure.

But in the end Cilea seems less an innovator, more a synthesist. Not a bold modernist as much as a craftsman of talent and now and again of inventive inspiration.

Pier Paolo Vincenzi does a fine job bringing these works to us. Anyone with an interest in 20th century Italy will gain knowledge of a composer who deserves hearing. The music pleases.