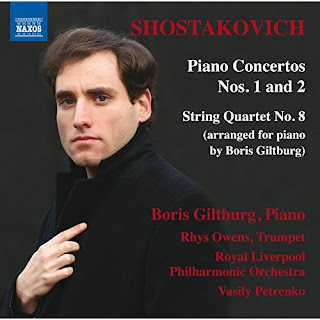 Shostakovich most of the time managed to run the social realist gamut of the Soviet Union censors while remaining true to his artistic vision. He did endure periods of marked condemnation, notably in 1936 and 1948, but for the most part his talent outshined the strife. That did not mean that he had an easy go of it. His piano concertos were a good case in point. They were separated in time by some 24 years. Concerto No. 1 hails back to 1933; No. 2 from 1957. A new recording of them by pianist Boris Giltburg and the Royal Liverpool Philharmonic under Vasily Petrenko is out and brings them both into sharp relief (Naxos 8.5736666). Both relied upon masses-inspiring gallops for the outer movements and lyrical interludes in the middle.  Dmitri must have felt  that such a sequence would meet with acceptance and approval. But there is ever a mood of refusal within each movement, a brilliantly original waywardness that survives as a subtext to outward compliance.

In any case the music holds plenty of attractions for us today. Very Russian in a Shostakovichian way, with enough modern touches to put them in the time frame of the then-present, they have real appeal and bittersweet poignancy when played in the ultra-spirited, then ultra-lyrical manner of Giltburg and the Royal Liverpool Philharmonic.

A dramatic shift can be heard in the Giltburg solo piano version of Shostakovich's "String Quartet No. 8." It is a much more "advanced" work, expressive and uncompromising, and we feel the contrast especially vividly when we compare piano part to piano part. It is around 1960, when Shostakovich was apparently under increasing pressure to tow the ideological line, and though he complied it left him in a temporarily shattered state. Quartet No. 8 was a work he privately dedicated to his own memory, looking back on his life in very expressive, dark terms. It was his own private music, completely unmindful of government approval or rejection.

The Giltburg piano version is a nice revelation, as is his version of the allegro to Quartet No. 2  that also appears on the album.

If the piano concertos represent Shostakovich's brilliant transcendence over orthodoxy, his Quartet No. 8 is a bitter rejection of it. There is stark contrast here, but with the dedicated performances on the disk, there is ultimate triumph!

Recommended heartily.
Posted by Grego Applegate Edwards at 6:09 AM