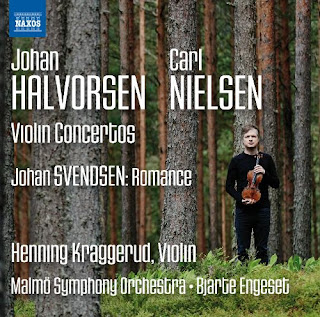 If one gets a certain distance from the origin period of one's love for music, one generally finds oneself being exposed alternatingly between the known, the known re-presented, and the relative unknown. So today I am pleased to express my receptive thoughts on such a mixture: violin virtuoso Henning Kraggerud and the Malmo Symphony Orchestra under Bjarte Engeset giving us a program of Violin Concertos by Johan Halvorsen and Carl Nielsen (Naxos 8.573738). Added as a short bonus is Johan Svendsen's "Romance."

Johan Halvorsen (1864-1935) was during his lifetime an internationally acclaimed violinist, conductor and composer. His Norwegian roots entered his musical language in a general way, and we can hear that readily within the late romantic Scandinavian idiom of his Violin Concerto. It was first performed in 1909 by Canadian violin virtuoso Kathleen Parlow, then only 18 years old. The work was greeted with an enthusiastic audience reception in the four performances Parlow gave the work between 1909-1910. In was never performed again during the composer's lifetime, and he apparently burned what he thought were all copies of the work on his retirement in 1929. That was a mistake.

But happily Kathleen Parlow had retain a copy of the complete score and parts, which turned up in 2015. Kraggurd premiered the first present-day concert performance in 2016 and on the heels of that made the world premiere recording of the work which we can now appreciate here. It is a substantial bundle of rhapsodic demeanor, folk color and a definite "Northern romantic" quality. Kraggurd and the Malmo Symphony conducted by Bjarte Engeset, give us a spirited, idiomatic reading fully worthy of the work's substance and charm. And so we have something of great interest in fully fleshed out form.

The Halvorsen performance certainly makes this release worth pursuing in itself. But then we have the Nielsen Concerto nicely done.  If you do not have or have not heard this aspect of the Nielsen complete opus you no doubt should.

Johan Svendsen's "Romance" is a sweet surprise. It is northern lyric rhapsodicy in a fine fettle.

And all-in-all this is a thoughtful combination, well worth the good Naxos price. Hear it!
Posted by Grego Applegate Edwards at 10:13 AM