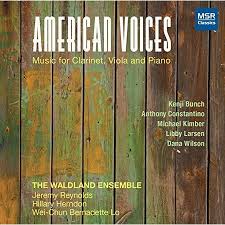 There is not a clinker to be heard and nothing save ultra-dynamic energy and lyric power in this anthology. The somewhat unusual instrumentation seems entirely right in the hands of this potent trio.

"Four Flashbacks" gives us brief but spectacular blues drenched vignettes that try and capture the composer's fleeting sensory and concrete memories of his musical upbringing in New York City.

"Ritual Songs" uses a three-note motif to launch a series of three short but intensive movements that function as a tripartite set of variations.

"A Thousand Whirling Dreams" gains inspiration from the vivid ending of the poem "As I Grew Older" by Langston Hughes.

"Vanishing Woods" captures the composer's love of the rapidly vanishing natural woodland settings available to us through treatment of an old hymn "For the Beauty of the Earth."

"Ferlinghetti" is a series of musical responses to the American poet's work.

We immerse ourselves happily in this music (or I do, anyway), which gives us a great number of reasons to celebrate the ongoing local efflorescence of the modern vernacular-influenced sound of the best in American chamber music today.

Very much recommended!
Posted by Grego Applegate Edwards at 12:09 PM