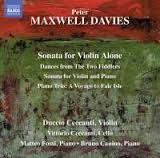 We lost composer Peter Maxwell Davies (1934-2016). But of course he left behind a large body of works and Naxos has been seeing fit to issue and reissue a large number of them Today we have an interesting chamber compilation of recent compositions, Works for Violin (Naxos 8.573599) featuring Duccio Ceccanti as the violin protagonist in a series of fine, virtuoso-poetic performances.

Three works cover the period from 2002 to 2013, one goes back to 1978-88; all tend to combine modernistic with tonal and sometimes folk colloquial sounds. Three of the four works are first recordings.

The "Sonata for Violin Alone" (2013) has a deeply introspective, ruminating quality and a stark beauty. It is one of Maxwell Davies' last works--dedicated to Duccio Ceccanti who gives us a very beautiful performance.

The "Dances from the Two Fiddlers" (1978/88) is a memorable fiddle-tune oriented work adapted from the children's opera of the same name with a series of brief but engaging ditties.

The "Sonata for Violin and Piano" (2008) returns to somewhat more formal grounds, though it portrays an imaginary walk through Rome on a non-existent walkway. It is modern-eclectic sounding in Peter's later, very personal way. There is drama in abundance for moments of considerable expressive power, then a disarming folk tenderness.. It is a tour de force for Ceccanti and pianist Bruno Canino.

The "Piano Trio: A Voyage to Fair Isle" (2002) brings in Vittorio Ceccanti on cello nicely for a modern take on folk forms and their integration into expressionist classical-modern style a la Maxwell Davies.

Duccio, pianists Matteo Fossi and Bruno Canino, and cellist Vittorio Ceccanti give us their sensitive and considerable all for a remarkable reading of these very intimate and revealing later works.

Modern chamber music enthusiasts and Maxwell Davies devotees no doubt will be captivated with this program as I am. But really there is beauty and accessibility for nearly everyone with the added challenge of very modern expression to brace our listening selves and provide a fabulously contrasting diversion.