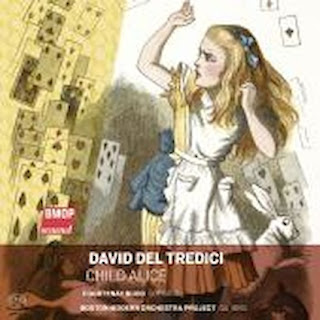 American composer David Del Tredici (b 1937) went from a Modernist to a founding Neo-Romanticist of the present-day beginning in 1980, when he won the Pulitzer Prize for the first part of Child Alice, which he completed with a second part and so put it in its final form in 1981. Soprano Courtenay Budd, conductor Gil Rose and the accomplished Boston Modern Orchestra Project give us a dramatic and rousing reading of the entire opus on their recent recording (BMOP Sound 1056).

I will admit that in my first few auditions of this fine recording I resisted the all-pervasive centrality of the sequential motif that Del Tredici returns to frequently. It seemed at first a little undistinguished. With further listens I began to appreciate more and more his variational, developmental treatment of the subject and the sheer creative power of his expressive thrust. At first too, the great strength of Courtenay Budd's performance seemed a little overwhelming. Perhaps both factors intruded into a mood I was in? I suspect this because the work and performance in time became more and more intriguing to me, and so too my mood had accommodated  itself increasingly toward the spell of the work, which turned out to be considerable. This was no mere Wonderland, but instead a complex reaction to the complexities of the Alice story origins.

To backtrack, Child Alice centers around Lewis Carroll's rowing expeditions with the young Alice Pleasance Liddell and her sisters Lorina Charlotte and Edith on summer afternoons. In the course of those excursions Lewis invented a series of tales to enthrall the young women. They later took final form in the Alice in Wonderland stories that have remained classics for us ever since they came out.

Child Alice on one level evokes the pastoral charm of summer on the water as inspiration, but then also in the inner states of the girls and their narrator. It sets up a sort of dichotomy of receptive youth versus youth-within-bittersweet-age and forms a kind of shifting mood that is neither one thing nor another.

All this forms the backdrop for the experience of the music itself, which has as its basis the text of a preface poem to one of the stories--about those rowing expeditions as the precondition of the marvelous fanciful story narratives as filtered through the glowing haze of remembrance. Each part builds around a contrasting setting of the text and includes some fascinating interludes for orchestra alone.

What stands out in the end for me is Del Tredeci's sure hand in utilizing the orchestra's many sonic resources as a sort of framing of the vocal narrative. The complexities of the mood come through especially by the way the composer makes of the orchestra an inner psychological commentary vehicle.

So also the Neo-Romanticism we experience in the work is not entirely a return to an earlier way of composing. It is filtered and fractured by the experience of modernity both in musical language terms as well as the complications of living within a modern world with all that entails. So the "through the looking glass" element is not just of Carroll recalling happier summer days past, it is also perhaps Del Tredici's experienced and bitter-sweet view of a tonality that cannot but exist in a post-purity of how we cannot quite recapture a pre-post-wars, pre-Freudian innocence about life and the music within it, about the stories we tell children.

My impressions may be slightly fanciful themselves. Child Alice in its expressive potencies invites such feelings. The strength of the work stems from its all-but-simple simplicity, its inability to return to an earlier state in all its pristineness, its existence in a sort of musical recapture from memory as one recalls childhood through the lens of maturity.

So at the last Child Alice derives its power from the loss of its subject. It exists on the happy surfaces of the water as well as the ambiguous depths of lost experience within recall. And in that way the music succeeds beautifully by its charmingly faded, outmoded yet wayward return. The music has power and depth that hit me only in time. Performances are near ideal. Any serious listener should find much to contemplate and appreciate if she-he gives this music a chance to work its way within the listening self, you.
Posted by Grego Applegate Edwards at 6:56 AM