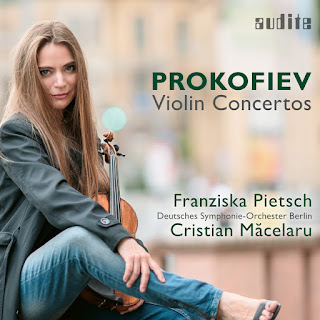 As time moves along, and it does, certain music becomes as if old friends. Nothing to take for granted, ideally a comfortable familiar that one turns to when spirits need brightening. The Prokofiev Violin Concertos (Audite 97.733) have long been that for me. The First Concerto I discovered when a Freshman in high school as a cutout in the local 5 & 10, the marvelous Szigeti version on Mercury. The Second I came to a little later, while still in high school, in the Heifetz-Boston rendition on RCA. The concertos are landmark Prokofiev, with thematic wealth and tender bitter-sweet beauty virtually unmatched in the modern repertoire for violin.

The two LP versions of the concertos long established themselves in my mind as benchmark performances that set the standard and defined for me what these works are about. As glorious as these old recordings are to me, I have in no way closed myself off to new interpretations. I am very happy that I asked to review the new recording of both concertos as played with brilliance by Franzisca Pietsch and the Deutsches Symphonie-Orchester Berlin under conductor Cristian Macelaru.

In the hearing and rehearing of the new versions I am captivated, from the first, with what Ms. Pietsch brings to the music.  The role of the orchestra engages very much as well.

The two works, as the liners remind us, mark the beginning and the end of Prokofiev's time in exile from Russia. What that means to the music does not concern me especially right now, since the works took their shape and life took shape as two interrelated but contrasting entities.

The First Concerto is very much Russian, modern without any hesitation, with almost a folk-Gypsy intensity and a beauty that persists in the work almost in spite of itself. Pietsch does not have quite the same folkish attack as Szigeti did, but what she brings is her own, at times even more savage than Szigeti, yet too with a soaring beauty Szigeti did not quite equal. The orchestra seconds her with a heart-felt staging and a detailed balance that together are breathtaking.

The Second is perhaps a less impetuous work and one that spins out regretful lyricism in even larger doses than the first. The rendition we get from Pietsch and orchestra is not perhaps as poetic as Heifetz but on the other hand has a dynamic and an irresistible engagement that brings us the tender and molto-expressivo sides in a new balance. There is pensive fragility and a little infernal zest in perhaps more equal measure than with Heifetz.

As I listened it occurred to me that Pietsch and Berlin respond to these works now, some more than 50 years beyond the two LP versions, at a time when hindsight in no way diminishes the works in our eyes and ears, yet it is music after all that we may now more completely, collectively understand and embrace as familiars. The "brazen" modernism that the music seemed to embody years ago has not disappeared, but it has become less off-putting, more naturally heard and understood, completely comprehensible so that Pietsch and Berlin can build on what we already accept and embrace.

These remarkable Pietsch readings do not replace the Szigeti and Heifetz. They stand alongside them as equals, which is to say much. She and Macelaru-Berlin bring to us joyfully alive interpretations that remind us that the music is as much a part of today as yesterday.

It occurs to me as I immerse myself in the music again that much could be said about a kind of tribal strain that both Stravinsky and Prokofiev introduced into the early modernist project that has parallels with Picasso and his fascination with African masks and such. You can hear a primal strain in this music, too. Pietsch lets herself feel that influence and she lets us experience fully how it belongs very much to parts of both concertos.

And so I conclude the review with much more that could be said. It is unnecessary to say it here. Suffice to say what I have. Franziska Pietsch clearly dwells in the heart of the music throughout. Berlin and Macelaru craft stunning orchestral sonarities to match. There are passages that nearly bring on tears, they hit home so well.

The recording to me is another benchmark of a way to approach Prokofiev. It holds its own and so brings me to a strong recommendation. It forms an ideal introduction to these masterpieces, or for that matter new versions that deserve a place in your collection. I tell you true. This recording may well be for YOU!
Posted by Grego Applegate Edwards at 7:08 AM