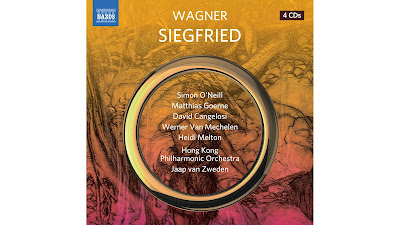 Richard Wagner (1813-1883) has over the years been many things to many people. Not all of them involve uses to which we would like to see him put. Like Nietzsche he was posthumously recreated as a poster child for fascism. There is no reasonable reconstruction that would make either of them Brown Shirts. Neither were they saints. But if Gesualdo could murder his wife and lover and still be listened to with awe and respect, Wagner is personally guilty of far less. Mostly he was used to represent an ideology he was not a part of.

And as we look back today, we see him as a towering genius of his age. Many readers will know him as an orchestrator whose coloristic and expressive innovations had much to do with or made possible the orchestral sound of Bruckner, Mahler, Richard Strauss and beyond. His prelude to Tristan und Isolde  gave cogent form to a modernist, harmonically advanced future. The forest scene of Siegfried, as Debussy himself indirectly pointed out in his music reviews, was supremely coloristic and a precursor to the Impressionist musical palate. The leitmotivic manipulation of operatic characterization was a revelation. And of course the Ring Cycle was a triumphant epic masterpiece of musical drama. There is much more to say but not in this space. The days when a critic could jokingly suggest that "Wagner's music is better than it sounds" has passed us. The music sounds for us today as eloquently as any past master does.

The Ring Cycle, seemingly against all odds due to its enormous length and its four intertwined operas, thrives in Beyreuth but also in the opera houses of the world.

Siegfried happens to be my personal favorite among the four extraordinary operas in the Cycle. That may have to do with the fact that it was the first one I immersed myself in. Yet dramatically it has so much, and so also musico-dramatically.. My initial version was a wonderful one with Knappertsbusch and a sterling Beyreuth cast. Moving as I had to, and in the LP days an entire Ring on disc was akin to moving part of a chimney, I ended up abandoning the Phillips and eventually got the Solti version, which was phenomenal as well. Then more moving and now I have a chance to review a new version with good soloists, the Hong Kong Philharmonic and conductor Jaap van Zweden (Naxos 8.660413-16) on four CDs.

There are sometimes little things that endear you to a particular version, perhaps more via familiarity  than inherent necessity. So I miss the superbly spooky Knappertsbusch treatment of the encounter of Siegfried and Fafner the dragon in the treasure-laden lair.  And then I miss the percussive chorus of elfen sword forgers on the Solti. On the other hand this Naxos version is a real bargain. And in the end it is surprisingly good.

There is so much to get right in Siegfried. The wonderful orchestral parts, the interaction of Mime and Siegfried, the love scene, Fafner, the Wanderer's appearance, the sword hammering, the forest scene, the heroic Siegfried. So much to get right and so much that is irreplaceable musically. It may be Wagner's most deft juxtaposing of leitmotifs, ever. This is opera as epic symphony, music drama as stunningly paradigmatic, in tremendous advance. All gets a crisp treatment, not overblown but in no way sterile, either. The cast is quite good, the orchestra responsive and precise. They get everything right. And even if you know the opera inside-out as I do, there is enough different and rather modern in the reading that you well should be glad to have it as a refreshing alternate to versions you have lived through most thoroughly. And if you need a first version, you cannot go wrong with this one and the Naxos price.

The CD age means you can have an entire Ring in four volumes and not have to move the furniture to the attic! This van Zweden Siegfried takes up little room and sounds great, too. So I recommend it!
Posted by Grego Applegate Edwards at 7:21 AM