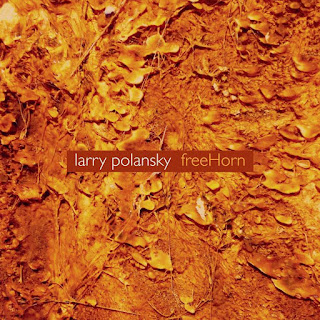 There are people no doubt who go through life listening to only one thing, one narrow pathway to one musical place. I suppose we should appreciate the single-minded zeal. Yet they are missing out on everything else! As anybody who reads my blogs no doubt understands, I advocate continually a listening mind that expands boundaries, that challenges the singular answer and goes forward in search of the multifold, as elusive as that search might sometimes be.

So after a couple of days of Debussy on these pages I switch gears to return to the present moment. It does connect. Yet at first blush they seem to be two worlds apart. Impressionism and new ambience are not as far removed from one another as one might initially think. And so we encounter today radical tonality ambience and another worthwhile Cold Blue EP (Cold Blue CB 0049), this one by Larry Polansky. It is called freeHorn after the 20-minute title work.

It is "freeHorn" that stands out as the most elaborate and satisfying of the three works. The two guitars meld with a chamber ensemble of computer audio, tenor sax, horn, trumpet, piano, electric violin and cello.  It involves as the composer describes "a continuous modulation between three different harmonic series" as set up and followed by the musicians via a computer audio roadmap. It sets up a drone and overtone backdrop that does suggest the natural sounding of the horn and its overtonal realization of the pitches it produces in a pre-tempered unforced sounding.

From the ongoing hum of fundamental and overtonal constancy are the punctuations of the chamber instruments that reinforce now one, now another, now eventually virtually all possibilities of a harmonic series and in the process creates vivid sound color templates while moving from harmonic series to other harmonic series. It mesmerizes and then intrudes with details that then recede into the harmonic smear. Altogether the work makes present a thing of atomized beauty joined together by the adhesive of a gestalt totality, if you'll pardon my verbose suggestion..

"ii-v-i" works within a three-part modulation as did "freeHorn," only it is the fretless and fretted guitar that work with soundings and broken arpeggiations while the modulations are made possible by retunings of the strings as the performance moves forward. It fascinates and gives us pronounced motion in the minimal chamber combination.

"minimaj" concludes the program. It is Polansky's recomposed/arranged version of Carl Ruggles's "Angels" for guitar(s). There is pronounced contrapuntal-harmonic movement. It is a very lovely way to end the program.

"freeHorn" is the main event yet the other two works reveal an equally sensuous immersion in sonic sunshine.

I cannot and will not tell you what to buy, what to hear. I do suggest with a big smile that you allow this music to enter your life. It is not quite like other things being made today, and all the better for that. Another Cold Blue gem is this one.
Posted by Grego Applegate Edwards at 7:07 AM