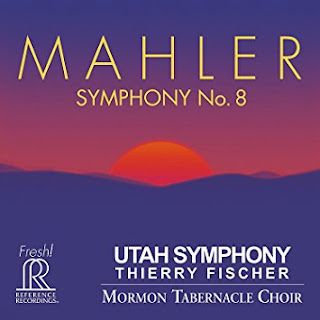 It was in our lifetime that Mahler went from being a rarified taste to the Late Romantic poster child. Richard Strauss used to be that, hands down. Now he is more in eclipse I suppose you can say than in 1950 or so, when he was at a peak in reputation and popularity among typical classical listeners. At least that is my impression. Mahler's symphonies are defining and constitute a personal journey through a world he was very much a part of as conductor yet very much an outsider as Jew and innovative force, an enigma as a composer to those at the time and up until recently. Increasingly we listeners value those works and find they speak with a voice we can understand and relate to, at long last. And Strauss has become more marginalized. It did take us a while to get there, myself among them.

As much as I've appreciated Mahler's Symphony No. 8 over time, I have connected only tangentially to it on a personal level. Until now. Thierry Fischer directs the Utah Symphony and the Mormon Tabernacle Choir in a brand new recording (Fresh! Reference Records FR-725CD).

There is so much to the 8th that it can fail to hang together unless you experience it as a whole. And it is true too that a conductor and performance may also lack the sort of dedicated unity it takes to put the parts into a whole. The nickname "Symphony of a Thousand" certainly underscores the challenge of harnessing the strength of the massive forces the work demands. I have heard versions that sound a little bloated or lacking a center of gravity. No matter. Fischer and the Utah contingent meet the challenges and bring us a single-hearted reading that perhaps is less Wagnerian (a problem with some readings) than Mahlerian, less strictly giganticistic and more focused than some. And the SACD audio most definitely helps pull it all off as brilliant listening.

When we realize that late Mahler is not precisely the same as earlier Mahler, that there is less of the folk-sarcastic idiomatic and more of a kind of Romantic centrism, we also should attend to the fact that there are many parts, if not most parts that give us an evolved expression wholly Mahlerian. So we can begin to forget the earlier style when listening and embrace what is there. It is no longer exactly local, Vienna and surrounds as filtered through Mahler's place in both center and periphery. It is looking outward to a larger world, perhaps. As so he would also end up in New York. That takes a careful reading, a balanced sounding of the whole of the score. We get that here.

There is an ecstatic sadness to Mahler at times that doesn't entirely conform to what you expect to hear from a symphony master, a level of regret that the 8th has at its core.  The beauty is tinged with a kind of transcendent melancholy, especially in the middle movements.

And this Fischer-Utah recording is all the things that the 8th has in such abundance, a remarkably balanced, detailed reading that is huge and ecstatic when called upon to be that, and then lingeringly introspective and regretful, yet beautifully evocative when that is in order. The 8th has never been a favorite with me. But I can say now that it no longer seems so anomalous to me, thanks to this fine rendition.

Mahler represents one of the glorious last gasps of another age, yet also the later music is mindful that his time is at an end of an era though he had progressed beyond the tradition and had flowered as very much a brilliant original as much as any composer of our times.

I must say that I heartily recommend this recording. There may be better versions out there. There are no versions I have heard that I like so much.