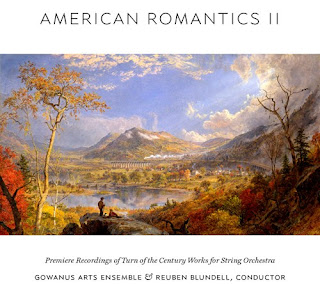 Turn-of-the-century America liked to see itself in its arts as both simple and ineffable, occupying in its drams and in its dreams a natural landscape fashioned and improved by humankind for its pastoral pleasure, along with the virtues of hearth, family, home and community in an ideal cast. Reality was in part these things but then all sorts of complexities and ambiguities, even in downright contradiction, namely its industrial juggernaut, inequalities, and the struggle towards Modernity that was to become paramount in a few years, but at first a direction only lurking in the woolgathered brown studiousness of future artists.

The freeze frame of a land poised to change rapidly yet still seeing itself with the lens of an ideal past can be heard in a volume of short works by the composers stylistically prior to the bold Charles Ives. They were roughly contemporaneous with each other in an overall field that Charles Ives found himself reacting with and against when he first came upon the scene. It helps us to hear and contemplate the Romantic matrix out of which sprang American Modernity. Plus it is music worthy of a hearing on its own terms. And it helps us more fully to grasp American Neo-Romantics like Samuel Barber who were to appear in the wake of these artists.

And so we have a volume directly relevant to such concerns, American Romantics II (New Focus Recordings FCR 166B). It is a worthy grouping of short examples performed devotedly by the Gowanus Arts Ensemble under Reuben Blundell. There is a serenity and transparent depth to these performances that seem just right. Nothing becomes mawkish as perhaps some earlier recorded versions could. Even the bookend Carl Busch arrangements of Stephen Foster songs are luminous and reverently staged.

Beyond the surprisingly moving Foster arrangements we are treated to softly glowing works by the likes of Felix Borowski, George Whitfield Chadwick, Arthur Foote, Paul Theodore Miersch, Ethelbert Nevin, Edgar Stillman Kelly, Martinus Van Gelder, Bernardus Boekelman. Louis Lombard, Arthur Bird, Charles Wakefield Cadman  Not all of these names you will know, I suspect, and some you will. Yet taken all together we get a true representative example of what the first end-point of American Romanticism might sound like in retrospect.

And the strings have a way about them that is almost early-music-like in their very retrained vibratoes and the plaintive matter-of-factness of it all. The sort of brio vibrato madness with which these works might have been performed some years ago disappears to be replaced by performances that are so much more convincing.

In the end we are given the chance to re-experience these works anew. For me anyway I feel like there is a new life to this music here. It is much more congenial and even touching to hear these somewhat naive pastoral works the way Gowanus and Blundell approach them. Bravo!
Posted by Grego Applegate Edwards at 7:32 AM