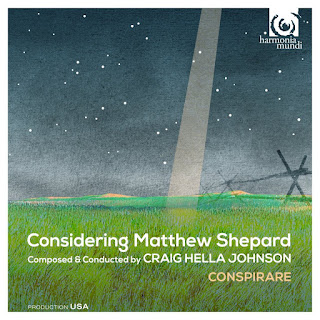 I was sent Craig Hella Johnson's ambitious choral-instrumental work Considering Matthew Shepard (Harmonia Mundi HMU807638-39 2-CDs) some time ago. I liked it on first listen but then the pile it was in became left off to the side in the hustkle and bustle of my life then. I rediscovered that stack behind other stacks recently and came back to the album. Subsequent listens made me feel ever more sure that the music was quite excellent and needed coverage despite the delay. So I turn to it today and hope to do it the justice it deserves.

The exceptional group Conspirare does the performance honors along with select vocal soloists. And they are the right performers in their ready ability to adapt themselves to the considerable and variably pan-stylistic, eclectic demands of the score.

The work is about the infamous hate crime, the brutal beating and murder of Matthew Shepard because he was gay. There is the chain of events and the long mourning, the long search for meaning in the aftermaths of protests and outrage, the senselessness of it all.

Johnson makes of it all a touchingly direct panorama. It is eclectically tonal, pomo in a way surely. It may well belong to an American patchwork quilt of sounds, a lineage that certainly includes Bernstein's Mass in its rooted recent past. Considering Matthew Shepard movingly and effectively combines a bit of minimalism with lyrical and theatre song, songwriting-singer traditions, earthy hymns, blues and gospel tinges, and choral vibrancy in telling the sad tale and in the end redemption of a kind we only get after the worst has happened. That is if we care to reflect upon the outrageous happenstances of some modern days and nights.

There is strength and fragility there to be heard. And a power much more than the first impression of eclecticism reveals. No, you must listen more.

And after a time you find that this music very much speaks. It is much more than the sum of its parts. It very much hangs together as drama, as documamusic, as ponder piece on the sad realities of events sometimes, and a healing in the end. Or a gesture towards that end.

It is not music intended to cut the edge of possibilities. Instead in draws upon a broad swatch of American local  musics to be of a place as much as of a piece.

All that makes the music and its performance a welcomely moving thing. There is lyricism in its healing. You may well love it. I think I do.