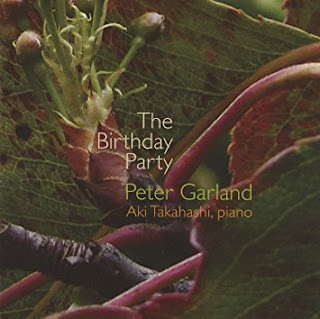 If you are looking for evidence that Eric Satie's time is now, you don't need to look very far. The Radical Tonality movement often enough eschews a conventional minimalist stance to go back to its roots in the Velvet Gentleman. Or anyway, that is what you can hear at times in their music. Composer Peter Garland  has healthy affections for the long-dead master. Or he does at any rate in his recent album of piano music, The Birthday Party (New World Records 80788-2).

Aki Takahashi does the honors as pianist for this program of three multi-part compositions, "The Birthday Party" (2014) and "Blessingway" (2011-12) for solo piano and "Amulet (After Roberto Bolano)" (2010) for four pianos overdubbed.

These Garland works are more expository than repeating in form. The repetitive parts move forward as they restate. They do not circle in a trance-like experiential zone so much as they reveal a kind of built-for-development poeticism. Everything said is a furtherance of the initial said-phrasing, mostly. There is in that a connection to what Satie sometimes was after.

There is a rich lushness and beauty to the music, a reflection pool of mirroring and remirroring that has a contemplative bent. In that way the development-in-similarity germination takes us past Satie into the more consistently furthered syntax of an after-modern form of musical discourse.

All three works open up vistas and sing melodically and lyrically without resorting to overly romantic or Winstonian hackney. It is a tough path to hew amd remain poetic and relevant. Peter Garland does it well and does it in ways that will give pleasure to the more causal auditor who merely wants pleasantry and nevertheless satisfies the more demanding, more sophisticated music heart-minder.

So go forth and add, multiply or divide with this music. It bears close examination. Ms. Takahashi seems like the perfect exponent as well. Listen and enter an enchanted space!