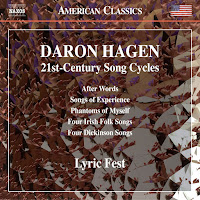 Once again into the fray of this century! Today, a living American composer, one Daron Hagen (b. 1961). We get five 21st Century Song Cycles (Naxos 8.559714). They are World Premier Recordings. Performances are by Lyric Fest, a Philadelphia-based  multi-vocalist-pianist gathering dedicated to the Art Song in performance. It consists  of sopranos Justine Aronso, Kelly Ann Bixby, Gilda Lyons, mezzo-soprano Suzanne DuPlantis, tenor Joseph Gaines, baritone Daniel Teadt and Laura Ward at the piano.

Those who know Daron Hagen's music well will forgive my ignorance. The Naxos back jewel-case blurb makes note of his operas, symphonies and concertos, and most importantly his more than 350 published art songs.  The blurb goes on to assert that Hagen is continuing the art tradition of American icons Samuel Barber, Leonard Bernstein and Ned Rorem!

If all that is so, I surmised on reading the blurb before I put the CD on, then this should be much to my liking! Does this music live up to the introduction? Read on.

For art song vocals I have in my head a couple of templates: Schubert, Elly Ameling and Dietrich Fischer-Dieskau. All that may indeed raise the bar to impossible heights, I admit. And there are other paths, more modern of course, and other vocal colors to apprehend and appreciate. How does this CD measure up?

Quite obviously it is too much to ask an Art Song composer to rise to Schubert's heavenly sky soaring. So also Ameling and Fischer-Dieskau were in many ways definitive performers of such fare. Face it, these yardsticks of measure are supposing a moment in Art Song perfection we should not expect to be equalled let along exceeded any time soon. Then of course a composer today must go her or his own way, and vocalists can give us exceptional performances in a contemporary realm without necessarily touching that set of particulars.

What, then of these five Song Cycles and their performances? Do they further the ambitious paths set beyond Schubert by Barber, Bernstein and Rorem? I will not say no. There is much very good music to hear on this program. And what of the performances? I will say straight off that pianist Laura Ward leaves nothing to be desired given the parameters of the works.

The seven song "Phantoms of Myself" (2000) with soprano Gilda Lyons is in performance and as Art Song stunning. The cycle covers a 24-hour day via the selected poem-texts of Susan Griffin, feminist and poetic strength. The cycle was initially commissioned for first performance by Ashley Putnam. Ms. Lyons brings her own magic to the songs.

Then there are the substantial and worthwhile presentations of first recordings of four other cycles: "After Words" (2013), "Songs of Experience" (2007), "Four Irish Folk Songs" (2009), "Four Dickenson Songs" (2014). All have a poetic lyricism, a tonal Post-Romantic aura, an expressive foundational communicative quality and a good deal of musical subtlety.

Is Hagen carrying the mantle of American Art Song development today? Undoubtedly, yes. Anyone with an interest in such things should find this collection compelling and very worthwhile. Recommended.