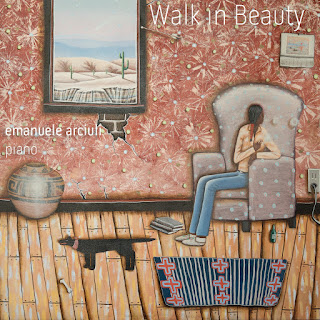 When we reach a certain point in our music listening every new work we hear adds to the understanding of the whole of what has been and will be. Before we grasp the continuity of music as a whole each new thing seems to have no apparent relation to another thing, sometimes.

Those who have come to the music well and drank deeply of its cooling nectar should welcome pianist Emanuele Arciuli and his Walk in Beauty (Innova 255, 2-CDs), a survey of Modern Contemporary New Music for piano that has thematic continuity. There are in fact two overarching thematic components, one an abiding evocative representation of nature, and the second, Native American culture through music composed or inspired by indigenous composers.

In all these shades of interrelated meanings we experience virtually the all of New Music possibilities side-by-side, Post-Minimalism, High Modernism, Radical Tonality, Expressionism, a kind of epistemological United Nations of contemporary styles, with a basic American center node.

Emanuele Arciuli shows his enormous interpretive acumen. Each work is given a surety of pianism, an extraordinary rightness of musical saying.

In the course of unravelling this two-CD set we encounter all the mystery and beauty the program promises. So there are individual identity pieces by the likes of Connor Chee, Peter Garland, Kyle Gann, Michael Daugherty, John Luther Adams, Raven Chacon, Martin Bresnick, Louis W. Ballard, Jennifer Higdon, Peter Gilbert, Carl Ruggles, Brent Michael Davids, and Talib Rasul Hakim. Some are well-known to us, others less so; some are Native Americans, some just give out with a natural ethos and foundational spirit-singing. All contribute uniquely and stand up alongside one another as a gathering of musical voices in a great saying.

And so this program fits itself into what contemporary music can be and is now. We no longer have to present a stylistic monolith that is meant to replace all with itself. No, this music creates its own bringing together to say in musical terms what can best be said in musical terms.

And for all that the saying is remarkable on the level of compositions and performances. With a coming regeneration of springtime this music stands as a sturdy and unflaggingly bright wayside directional beacon. It is however for any season, for all seasons. It points but it also supremely IS. Listen. Listen again.
Posted by Grego Applegate Edwards at 7:15 AM