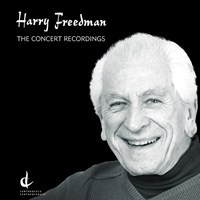 Every day brings more new music and when it is very good I am very happy. I must say that there can be incredible music in the offing, and without the review connection I would have missed some singular releases over the years. I feel like that after having heard a number of times Harry Freedman: The Concert Recordings (Centrediscs 23517).

It is a sort of mini-retrospective from a Canadian composer of true merit. Orchestral works from 1960-2003 get fine performances and give us an insightful look at the magic of Freedman's music. He lived from 1922 to 2005. Like some select others on the new music front he amassed a significant body of works (based on this vibrant sampling, anyway) and from where I sit was not given the recognition he deserved.

There is never a time to appreciate music of merit that is really "too late." The Concert Recordings gather together some CBC Radio broadcasts with a fine aural staging and worthy performances. It all sounds as great today as it might have back when these broadcasts aired.

As the liner notes for the CD assert and as my ears affirm, Freedman was a masterful orchestrator. The sound palette is ever of the most subtly brilliant sort, regardless of the stylistic variables of Freedman's music over time. There is mystery in the music, all informed by a Modernist expression but not all of a piece. There is change, development, constant creative thrust to be heard. Perhaps the orchestral palette could be at times described as sort of Neo-Impressionist? Not entirely always and not in some derivative way.

I will not attempt to pinpoint stylistically the ins and outs of the works on the program. Your own ears will tell you what you hear and it is enough to say that there is originality and highly expressive results throughout.

This might be the sleeper of the year! What is clear is that Freedman was a master of the Modern Orchestral Arts! Put this one on and pay attention if you will! It is well worth your eartime.
Posted by Grego Applegate Edwards at 11:45 AM