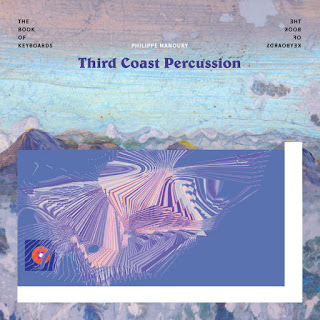 The body of New, Modern Music for percussion ensembles continues to grow and develop. Thanks to cutting edge ensembles like Third Coast Percussion composers can create new works with some confidence that they can get a proper hearing if conditions are right. The CD at hand is a fine example of the continued excellence of new works appearing in the present day.

The two works cover a kind of linear modern territory that alternates between full out contrapuntal energy thrusts and more reflective, more intimate soundings. The sound colors possible in the mallet zone are clearly an important factor in the music we hear on the program. There is a relation to the gong and key tradition of Thailand, the Philippines, Bali, Java and so forth. Rather than tightly coil and repeat phrases a la minimalism this music is more through-composed and endlessly varying. It holds some lineal relation to early Cage-Harrison works for percussion. In the whole of those associations however there is a marked personal development to be heard.

All that is what I bring to the table hearing this music. Turning to the liner notes I get a more formal and insider view of that is up. The liners talk of the extraordinary demands Manoury makes on the players. Part of the score supposes that the ensemble constructs an instrument via the specifications Manoury lays out in the score. The original specs were given by composer Xenakis: to allow choice and to be built from scratch. Manoury adds some other requirements. The result is the sixxen, which appears from time-to-time in the title score and happily so. The liners go on to talk about Manoury's post-dodecaphonically originated closeness to Boulez, and the sheer difficulty of parts of the scores in the execution realm. All this is quite helpful to take in the full impact of repeated hearings.

In the end, though, we are drawn in by the aural sensuality of the music, its vibrancy and liveliness. At times the music is nothing short of spectacular. As you listen you might ask yourself if this particularly demanding scenario is fully necessary for an appreciation of the music as it speaks to us. The answer is that is is the very thing that keeps the music from becoming a new world music per se or in other words a structural clone of world musics related to the sounds here. Without what Manoury brings to the notes and sequencing it would not be Manoury music. Perhaps that is obvious, but only after you have lived with this music with some intimacy over time.

So that is what strikes me. The music has great depth. It is difficult to play at times but not difficult to hear.The sensual pleasure of mallet instruments is at the forefront. The form the music takes is the identity marker and it is what sets it apart. All told, this is music of singular significance. And it will appeal to anyone predisposed toward the sounds we hear so nicely. The substance of the music makes it especially worthwhile. I recommend this album without hesitation. If you feel like you would like it, I have little doubt that you will!

Posted by Grego Applegate Edwards at 7:30 AM