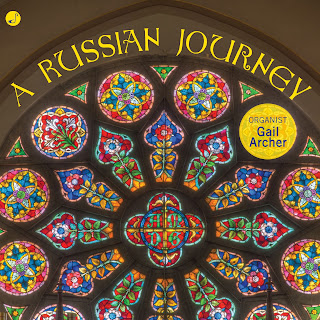 When an album presents to a listener like me a body of works I might only dream about and do not expect to find, it is an occasion. And then I listen with avid interest. That is what has happened on the recording at hand. It is organ music of the Russian Five! Plus one. That is, we have a selection of organ works by Mussorgsky, Cesar Cui, Ljapunow, Glasunow. Slominski and Alexander Schawersaschwili. I speak of the album by organist Gail Archer, A Russian Journey (Meyermedia MM17035).

Of course the Russian Five were supremely important original figures in the development of a genuinely independent Russian classical identity. Mussorgsky alone was a titan but none of them are at all explained away by the Romanticism in the air all over the West at the time. What is primary is a continuity with the classical tradition but a search for Russian expression and in the process an oblique path towards a Russian Modernism that only comes to its fullest flower with a Stravinsky, a Prokofiev and later a Shostakovich.

To keep all of this in mind as we listen to this program of organ music is to feel a creative turbulence and an expressive movement that only becomes clear in the teleology of time passing. The music we hear on A Russian Journey is very much in the organ music lineage of the later 19th Century. So we hear a relationship to the symphonic fullness of Franck and his school, yet also a clear pulling away with the Mussorgsky especially, and truly present in more or less subtle ways in the rest.

The critical contrapuntal influence of Bach can also be heard to greater or lesser degrees, especially in the various preludes, fugues and the toccata.

All of this music is not inconsequential and well worth repeated hearings. The organ version of "Night on Bald Mountain" is fabulous and revelatory. Who but Mussorgsky could craft such an expression when he did?  But any Russophile of a serious sort will welcome the entire program. The performances by Gail Archer have heart and expressionist aplomb.

In the end I recommend this very much. The audience may be self-selecting. You are either someone who wants to hear this for all the reasons you do, or you do not. In other words, this is probably not the album to transform you into an organ music lover nor does it lend itself especially to function as a first stab at Russian classical appreciation, though it could if you come to it as an organ enthusiast.

In the final round this program offers much to treasure.  Get it if it sounds like it has your name on it.