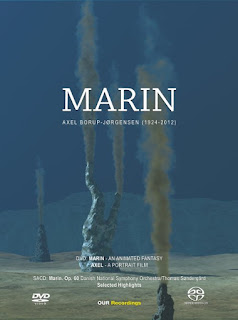 I have gone into the music of Danish composer Axel Borup-Jorgensen (1924-2012) at some length on these pages. (See articles from February 23, 2017, February 3, 2014 and September 7, 2016.) However I have not previously discussed his orchestral works. This morning I get the opportunity for that with a deluxe DVD-SACD set of Marin (Our Recordings 2.110426). The DVD contains two films that utilize Borup-Jorgensen's music, "Marin, An Animated Fantasy," and "Axel, A Portrait Film." The SACD contains the full nearly 20-minute performance of the orchestra work "Marin" plus a number of chamber works from the film of the same name.

I have no way of commenting on the DVD because every one of my players or disk drives has failed in the last several years.

On the SACD I have happily spent a good deal of time. Its nearly 80 minute length allows a good number of relevant compositions from the film(s) to be explored. The orchestral opus "Marin" gets a fully fleshed, vibrantly sonic reading from Thomas Sondergard conducting the Danish National Symphony Orchestra. Written at various stages between 1963-1970, it has a High Modernist soundscaped sonority and a good deal of dimensional depth. I would not hesitate to number this as among Borup-Jorgensen's most profound and effective works.

Another essential on the disc is his "Coast of Sirens, Op. 100" (1983-85) for flute, clarinet, violin, cello, guitar, piano, percussion and multivoice tape. The female voices ethereally evoke the seductive clarion call while the chamber ensemble wraps itself in and around the vocals with luminous elements of very modern atmospheric articulations.

The two works form a crucial set of bookends for five more sparsely configured works. There are two pieces for solo recorders, very characteristic of Borup-Jorgensen's angular contemporary treatment of the instrument. The 1955-56 "Music for Percussion + Viola" has a heightened sonic sense, a rhythmic drive and a pronounced trajectory more-or-less characteristic of the best New Music of that period. The Percurama Percussion Ensemble and Tim Frederiksen on viola contrast and commune together in ways that make for worthy listening. The 1989 "Fur Cembalo und Orgel" dramatically explores sound colors and wave-like swells while one of the 1959 "Winter Pieces" for piano gives us a gentle and chilly weathered rumination.

In all the SACD provides the modernist aficionado with the most freewheeling and variously instrumented introduction of Borep-Jorgensen's music I have yet to hear. No doubt the DVD film sequence adds to our appreciation as well. For that I do recommend you check out this offering. It is something of a milestone among Scandinavian New Music offerings in recent years.
Posted by Grego Applegate Edwards at 6:59 AM