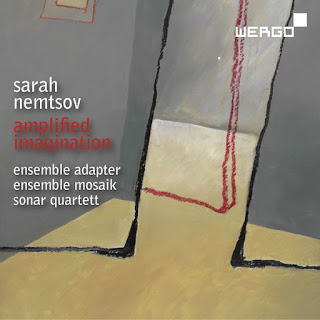 Sarah Nemtsov (b. 1980) has High Modernist cachet in my mind. I feel this way after happily exploring thoroughly her recent album Amplified Imagination (Wergo 7366 2). There are five compositions, each making use of conventional instruments along with electronic alterations and re-presentations. Each performed-recorded work occupies its own special world.

It is a multiple worldscape that opens up sonic possibilities that ever differ, that are a product of an ever-evolving dialectic between organic tones and their transformations. The ear catching opening "White Eyes Erased" sounds more musique concrete than instrumental at some points, then relatively untransformed things like a drum set come into the sound envelop dialoging  performativity and effectively for a while with the concretized sounds. Then drums and transformations give way to other envelopes, special messages to the listener in sequence. (As a drummer-percussionist myself I perk up with such sounds.)

So on the other spectrum of possibilities we have "zimmer I-III" which is a little more directly chamber-like with eight musicians including laptop players-transformers, amplified harp and amplified string quartet. Transformed sounds are integrated, as in a way another instrumental voice than a totally transformed ambient-timbral whole. Yet the music thrives on extended techniques so it is never a for-granted sonics. Never that.

"Implicated Amplification" for amplified bass clarinet and three effect pedals is redolent and bursting with beautiful instrumentality, so to speak. Ms. Nemsov supplies that snakelike agility of an instrument with repeating patterns and timbral intersections both thoughtful and moving.  It is a good example of what makes Sarah Nemtsov special. There is imaginative deliberation to all of these works. You feel after listening that there is a very alive somebody behind the contemplative and often extroverted sounds.

I would say to you after listening many times, I would say listen to this without fail if you hold High Modernist and "Free" sounding music in high esteem. It is in its own way a triumph of sound over silence.

Posted by Grego Applegate Edwards at 6:58 AM