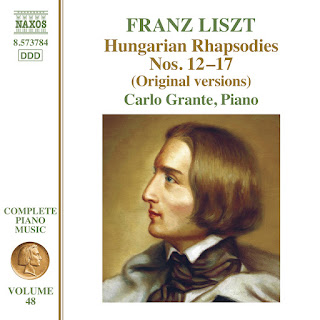 Just how much piano music there is by Franz Liszt can be approximated by the fact that Naxos is now at Volume 48 of their complete set! There is no apparent let-off. This volume plays to me and I cannot help but smile as I listen for the sixth time. It, to be specific, is a recording of the Hungarian Rhapsodies Nos.12-17 (Original versions) (Naxos 8.573784). The pianist is Carlo Grante, who is not out to prove just how flashy he can be, and that is a good thing if we want to assess the original treatment and not merely be dazzled.

So what have we to gain from hearing these prototypical versions? The Hungarian Rhapsodies can be profitably seen as one of the first significant forays into "nationalism" in the classical fold, which nowadays we might boil down to the use of "native" ethnicity or folk materials as the basis of a new music. It was never entirely something out of the blue, since someone like a Haydn was known to incorporate local thematic materials into his music--for example a string quartet appropriating the theme from what later most unfortunately became identified with the Nazi's as "Deutschland Uber Alles." And let us not forget how Renaissance composers often imported local songs of the day into their contrapuntal works--"L'Homme Arme" being a favorite in Masses of the time.

All this to say that perhaps the nationalist element is secondary in our modern minds to the folk appropriation? If Bartok utilized Romanian elements in some of his works, are we to quibble that this cannot be the same thing since he was not Romanian? It seems wrong-headed. By the way, I reviewed a disk with some of Bartok's Romanian-themed works in a review on here a short time ago. Look at the contents index on the right.

That an aside, but it nevertheless serves to situate Liszt's Hungarian Rhapsodies for us as "ethnically specific" music, and most importantly excellent music for all that. The original versions of Nos. 12-17 have all the thematic charm of the ones now much more well-known to us. What maybe is most telling in the early settings is how the treatment is not exactly typical compared to the later way Liszt developed a virtuoso pianistic style that became so influential from that point forward. Listen to some of Keith Jarrett's solo recitals patiently and you hear eventually how it is still with us. The earlier Liszt Rhapsodies are a kind of un-self-conscious approach that perhaps aims at a musicality not entirely virtuoso-centered, or alternately not always quite typical of Liszt's codified later virtuoso style.

In this way and also because the varied treatment is distinct enough to give great pleasure in its own right. anyone who loves Liszt would benefit from having these versions ready to hand. Having also the related "Magyar Dalok," another alternate version of the 10th Rhapsody and "Puszta Wehmut" are all welcome additions.

In short there is much good listening to be had here. Those who know and love the Rhapsodies in the famous versions will find this a delightful alternative. And in any event the performances and obscurities make for welcome fun and enlightenment. So grab this as you may.