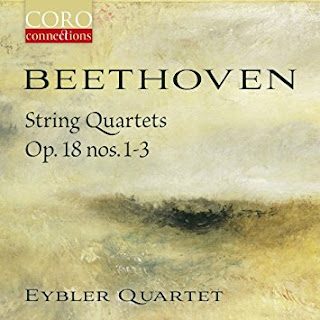 When cognoscenti speak of the string quartet literature, they often mention Beethoven's late quartets as a watermark of the greatest and deepest works in the history of the medium. Yet of course his early and middle quartets are landmark works that do not fail to enchant and delight. If the early works have an affinity with Josef Haydn's quartets, it is in the way they embody structural integrity of the highest sort while expressing a beautifully balanced expressivity. If they do not probe the deepest levels of brooding introspection or climb ecstatic heights of bliss, they adroitly balance affect and ever transforming musical architecture in ways that already point to a very personal way of expression.

So we very happily have a new version of Beethoven's String Quartets Op. 18 nos. 1-3 (CORO Connections  COR16164). The Eybler Quartet give us their own singular readings of the first three quartets of the six that comprise Op. 18.

The liners to this fine recording alert us to the unusual repertoire stance of the Eybler Quartet which explains in part the unusually special reading they give these works. That is, that their repertoire sees the Beethoven Quartets as the end-point in a spectrum of possibilities for the group to master. And the notes' assertion that this view of Beethoven is "from the other side" of the timeline is telling. So too one might expect their view of the Op. 18 works would be supremely Classical and less Romantic than some well known versions we have had the pleasure to hear over the years, in my case especially the Budapest Quartet recordings. And that is very true.

It is a reverse engineered Op 18 that has a brio that is more mercurial and intimate than emotion drenched. There is a subtle buoyancy to their readings, a most refreshing underplaying and removal of vibrato except for contrast in phrasings and for variable timbral presence. It seems more appropriate today to hear  a less anguished, less heart-on-sleeve gushing quality in these works. And it is not to say that these readings are without feeling. They are quite feelingful. They just do not blubber so much. They do not so much openly weep as they quietly sigh. Eybler's togetherness and technical brilliance, too, are absolutely thrilling. That brilliance enables them to accentuate the near playfulness of the allegro movements, the quasi-Viennese folkish Beethoven, the contrast between sincere tenderness and bracingly swift flight.

I will not go on at length about the myriad virtues of the music and its special presence with the Eybler Quartet. These are versions that serve as a critically righteous introduction to the three quartets in Beethoven's beautiful first efforts toward his very individual vision of the fourness string world. It also will be a most worthwhile addition to the collection of those who already know and love these works, for these versions give you insight into what the quartets are deep down and on their dazzling surfaces. Heartily recommended.
Posted by Grego Applegate Edwards at 6:53 AM