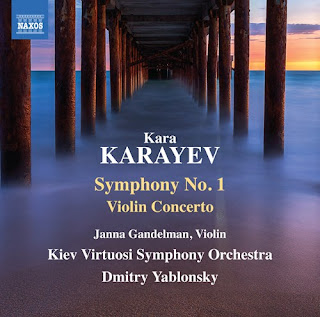 On December 30, 2013 I reviewed music by Kara Karayev on these pages. Here we are some nearly five years later and I have another one to bring up. Today there is a new CD of Karayev's "Symphony No. 1" and his "Violin Concerto." They are played enthusiastically and quite respectfully by the Kiev Virtuosi Symphony Orchestra under Dmitry Yablonsky. Janna Gandelman is the violin soloist and she sounds well.

The music itself is the main attraction. Karayev (1918-1982) is considered the father of modern Azerbaijani classical music yet too he was aligned in the camp of the Russian moderns.

The two works on the album are a nice contrast. The "Symphony No. 1" was written in 1943 and seems very much Russian Modernistic with the sort of lively severity Shostakovich did so well. Yet this is more than an an extension of that influence, for it travels far into a very vibrant palette of expression, dark and then brilliant, somber and then heroic, but serious, always even though there is a sarcastic playfulness to be heard, too.

The  "Violin Concerto" jumps ahead to 1967 and Karayev's very personal take on Serialist possibilities. There is even more of the Modernist to be heard, yet it very much sounds pan-Russian-Azerbaijanian in an individual way.

These two works bear much fruit on close inspection. They are neither inconsequential nor lightweight. They are convincing reasons why Karayev should be heard today. For he holds his own. Very well.
Posted by Grego Applegate Edwards at 7:06 AM