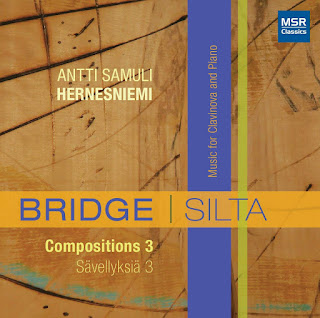 No one who knows the New Music world we live in today would tell you that you might expect just one possibility when you are exposed to a new composer these days. There are I suppose limits to what one might hear but I can say honestly that I do not detect what the boundaries might be. So every new exposure gives one a new possibility. I bring this up because the music of living Finnish composer Antti Samuli Hernesniemi as I am hearing it on his recent CD Bridge/Silta (MSR Classics 1615) opens up interesting ground on the piano/clavinova (MIDI driven piano) front. This is the third volume of his compositions released on MSR and the first I have heard.

It is an example of how open the New Music world really is. Hernesniemi writes/performs piano music that may be entirely independently generated but as I listen I am reminded of the whirring movement and fanfarish attack of the late very brilliant piano artist Cecil Taylor. Now he came out of "Jazz" of course, which is only to say that he was initially rooted in Jazz style and that his ensemble work included a rhythm section and other soloists. He studied in his formative years at New England Conservatory where he had Classical training--and so did Miles or Sam Rivers have this training among many others. That is not to say that we can in anyway explain Cecil Taylor by his exposure to both Jazz and Classical music and ideas. He is the sort of brilliance who would have emerged as an important artist no matter what his formal training might bhave been. And by the same token the piano music of Hernesniemi could have been derived out of that Jazz and Modern Classical exposure too. Or maybe he heard this regardless. In the end it does not matter except to remark that if you love the explosive motility of Cecil Taylor's playing then this music will attract you for its splattering sprawling energy.

And there are some more inwardly tuneful works here that are a thing apart from that, yet in the main, there is an open formed "total tremolo" approach here that most characterizes the music.

All that is simple in basis yet the working out is original and exciting to hear. So if you want new that stimulates you invariably, there is Bridge. If you are an open soul I believe this will be much to your liking.
Posted by Grego Applegate Edwards at 8:11 AM