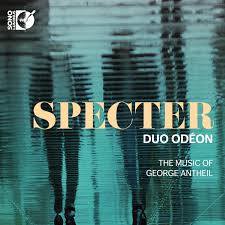 Any serious student of Modernism has no doubt been exposed to George Antheil's "Ballet Mechanique" and one may get a great deal out of such music, which is only fitting. That there is a lot more music of his to check out I sometimes forget, partly because much of it is not always very available in recorded form lately. He may at one time have been an enfant terrible of American Modernism (in the earlier part of the 20th Century). It so happens though that his music has lasting power. It is more than a music of ideas, though it can be that. It is also a music of music!

George Antheil (1900-1959) in this light can most favorably be heard on the recent premiere recording of Duo Odeon and Specter (Sono Luminus 92222). It is an entire disk devoted to George's mid-40s compositions for violin and piano and it is in that wise a major undertaking. We get a chance to hear three substantial compositions played with true verve and understanding.

As it turns out, the three works have an important link in common as they also have a heightened importance for Duo Odeon. To start though, an inventory. The three works in question are Antheil's "Sonata for Violin and Piano" (1945), his "Concerto for Violin and Orchestra" (1946) here in the reduction for violin and piano, and the recently discovered "Valses from Specter of the Rose," (based on Antheil's 1947 film score of the same name) which was specially arranged by violinist Werner Gebauer. The latter was unearthed in 2016 by Marcus Gebauer (Werner's son) and enjoys a premier recording here, happily.

And in fact the presence of Gebauer is key to all three works. George and Werner were by then close collaborators and intimate friends. The two published works were specifically written for the violinist who gave them their first performances.

At the same time as this music is a celebration of the closeness of Gebauer and Antheil, it also has great significance in the origins of Duo Odean, a most auspicious blend of the talents of violinist Hannah Leland and pianist Aimee Fincher. Both were in the midst of doctoral studies in music at Arizona State University when they met as fellow members of the contemporary music ensemble there. Research into George Antheil and the two main works featured in this recording brought the two together and understandably became an intense focus that has its floration in the performances we hear on the disc.

The Sonatina is a major offering performed with an excellent insight into the music, which is illuminating certainly of Antheil's brilliant inventive talents.

The Concerto is most lively, and if I sometimes notice some passages very indebted to Prokofiev's First Violin Concerto, it is with a certain joy since Antheil integrates and revivifies the motifs to make something altogether his.

The Valses are a welcome addition. Three movements at a little over six minutes do not sound at all incidental but substantial in their brevity.

And in the end I come away from this CD with a real appreciation for Duo Odeon and their beautifully communicative Modernist musicianship and virtuosity, none of which they wear on their sleeve so much as integrate into an Antheil-centric presentation. And after all that is what it should be all about, bringing works alive as fully an expressively as possible. The Modernist Antheil has a beautifully thematic side and we hear it to great advantage on this premier Duo Odeon offering. Bravo!