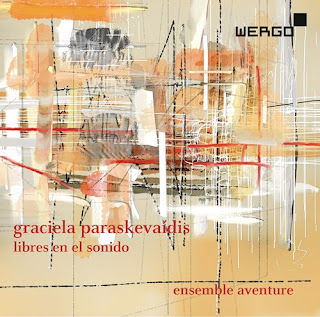 The striking originality of composer Graciela Paraskevaidis is apparent from even the first note of her album Libres en el Sonido (Wergo WER 7362-2). Seven compositions of varying chamber density are performed with dedication and characteristic elan by Ensemble Adventure.

Doubtless I am not the only one new to her and her music so a little background no doubt is in order. Graciela Paraskevaidis (1940-2017) was Argentinian born, of Greek ancestry. She lived and worked in Uruguay. She studied composition with Roberto Garcia Morillo at the National Conservatory in Buenos Aires, then later on with Gerardo Gandini, Iannis Xenakis and Wolfgang Fortner.

The end result is Paraskevaidis, not exactly something predicted by her compositional mentors, except perhaps a kind of unswerving rare-ification that you can also hear often enough in Xenakis. With Graciela though the means and more or less the ends show no real derivative qualities so much as affinity.

Ritual-gestural-brutal? Wolfgang Rudiger in the liners describes the unprecedented nature of what we hear in the opening bars of the first work on the program, "Libres en el Sonido Presos un el Sonido." "Raging scales in the woodwinds seem like rain squalls lashed upwards by the windstorm, braced on the one side by widely stretched tri-tone-fourth-chords and spurred on by the obsessive minor second repetitions in the piano. . . " This most aptly describes the sort of brutal-fanfare-ritual infernalities of her music we get from time to time on this program. These interludes of manic determination break off and may follow by contrasting sparsenesses that are quiet and filled here and there with more or less empty spaces.

Each of the seven works of the program falls within a ten-minute or less timespan. "No Lado, Otre Lado" is for piano alone; "...il Remoto Silenzio" for solo cello. The rest are scored for three, four, five, and eight chamber instrumentalists.

The music can we insistently manic as suggested above but giddily light as well, sometimes both within the same composition, sometimes not. The quiet passages can almost seem hallucinatory, dream like, unreal. And throughout there is a most singular vision or series of them at work.

There is nothing out there quite like this music. It stands on its own almost obstinately and it marks Graciela Paraskevaidis as a remarkable artists in a set of one. This is music you must meet more than half-way. But if you give it a fair hearing I think you will be surprised and pleased with the invention and singularity of the composer. Recommended for all those who are open to the avant guard aspects of Modernity.


Posted by Grego Applegate Edwards at 7:34 AM