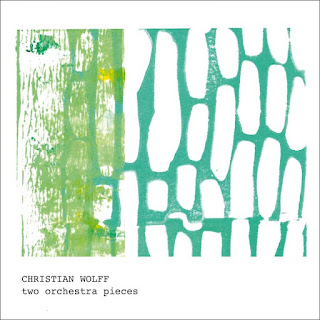 Take the Cage School composers for granted at your own peril. Earl Brown, Morton Feldman and Christian Wolff avoided Serialism and forged stubbornly their own paths. And I believe time will be kind to their reputations as a result. They are some American originals and they sound ever fresh.

That is all well and good yet moreover now I find that later Christian Wolff constitutes some major sleeper works, judging by the startlingly interesting new release, Two Orchestra Pieces (New World 80796-2).

What first of all marks this release as special are the performances. Later Christian Wolff carefully scores every note and the interpretation must be exact yet moving. "John, David" (1998) gets focused attention from the SWR Sinfonieorchester Baden-Baden und Freiberg under Lothar Zagrosek. Robyn Schulkowsky dramatically and adeptly handles the important solo percussion role.  "Rhapsody" (for three orchestras) (2009) gets similar careful understanding by Ostrvska banda with three conductors doing a fine job.

The liners sum up how both works exemplify several trends in New Music performance by the Modern Classical orchestra. "John, David" is a masterful unravelling of the expanded sonarities of the expanded symphony orchestra and the percussion part further opens up the timbral spectrum so that we enter a fantasmagorical terriane that is not only exemplary but strikingly special in its deep subtle expression.

"Rhapsody" groups the total orchestral forces into three unusually mixed concentrations, decidedly not the sections one has become so used to from the orchestrational practices of the standard repertoire.

All that would be not unusual to hear nowadays, of course. What sets this music apart is the special facticity of the combined utterances. Nothing is exactly what you might expect in High Modernism of the standard sort. There are no moments of rote note-spinning. Every moment in both cases has its way and brings to our ears and musical beings a kind of discerning difference that in the end makes these two works function in their own specially original ways.

It is a something you hear in the music from the first listen on. Later listens confirm the first impression and the non-cliche quality of every note makes every listen a near tabula rasa thing.

You who follow the New Music and Modernism, you should definitely consider this album. It is a high point of the "Modern Year" For me at least. It reminds me how Christian Wolff is a beautiful thing, a thing apart!
Posted by Grego Applegate Edwards at 7:26 AM