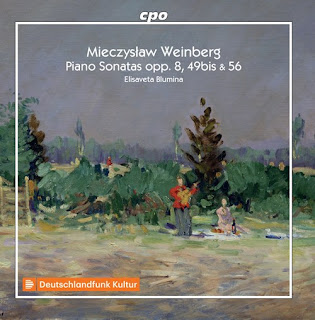 As much as there seems to be a renaissance or perhaps even a naissance surrounding the works of Mieczyslaw Weinberg (1919-1996) it is comforting to me. I happen to share in the budding and gathering enthusiasm about his music. I will not rehearse here the difficulties he encountered with his existence as a Jewish-Polish transplant to the USSR during WWII and his subsequent compositional and personal struggle with forces that did not favor him in spite of his extraordinary talents. That is a backdrop to explain why most people were not aware of his music at all until recently. But in the end of course the music is what lives for us now.

So there are further reasons to appreciate his body of works with a recent, excellently performed recording of three of his later Piano Sonatas opp. 8, 49bis & 56 (CPO 555 104-2). In other words, these lovely recordings are of his Sonata No. 2, Number 4 and 49bis, the latter of which is not as of now numbered. Elisabetha Blumina gives us these new readings on the heels of her recording of his Sonata No. 1 and his "Children's Notebooks." I have not heard that recording but based upon the one at hand I imagine it is very worth hearing. I've reviewed Weinberg's complete piano opus and one or two recordings of some of these sonatas (type "Weinberg" in the search box above). They remain essential in each their own way

But I am especially impressed as I listen a good many times with Elisabetha Blumina's performances. She is exacting as one would expect but also there is a virtuoso mastery to be heard that makes these rather wonderful pieces come very much alive. My first superficial hearings of Weinberg as a whole made me think, "Oh, he was very influenced by Shostakovich." He was a good friend of his fellow composer and Shostakovich spoke very highly of his talents during his lifetime. And with the piano works you most certainly do here something of an affinity with Prokofiev as well. With all three at their best you hear an uncanny brilliance in how they derive a sometimes very lyrical demeanor but tempered also with a hard and perhaps even brittle despair, not to sound too pat but it is something I do love about all three of them. What at first sounded a bit derivative I now feel is equally special, original and it could well be that Shostakovich influenced Weinberg but equally Weinberg in turn influenced Shostakovich? I say this after listening very intensely to Weinberg's music.

The sonatas here are uniformly worthwhile. If you love Modernist solo piano and seek something new and very worthy, get this! If you do not know Weinberg, get this. If you do not have any of his piano music, get this. Or even if you do, for the performances, get this!
Posted by Grego Applegate Edwards at 6:53 AM