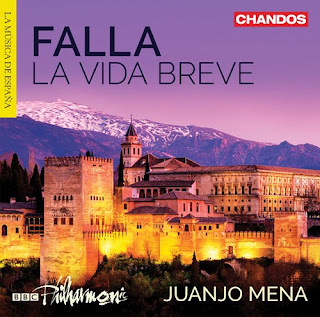 If you ask me Manuel De Falla (1876-1946) was one of the very greatest of 20th Century Spanish composers. Nobody could quite harness the Spanish tradition into Modern, buoyantly impressionistic terms like he could. After a near lifetime of listening to his music, including arrangements of excerpts from La Vida Breve (1904-05, REVISED 1907-13) I finally get a chance to sit down and listen in depth to the full opera in a very nice aural staging with Juanjo Mena and the BBC Philharmonic (CHANDOS 20032).

I must say after some concentrated listening that the full work in this version does not disappoint in the least. Mezzo-sopranos Nancy Fabiola Herrera and Cristina Faus, tenor Aquiles Machado, the chorus and the rest of the cast join with the orchestra for a very memorial performance, especially the second half where the music gets quite folklorically reminiscent in the Spanish tinge zone.

The entire opera sings. You get the full libretto in this edition and a performance that is as painstaking as it is jubilant. His orchestration is worthy of a listen in itself alone.  But truly nothing is lacking in either the parts or the performances of the cast either.

The liners tell of De Falla's move from Cadiz to Madrid at the turn of the century, his budding interest in the vocal arts, three unsuccessful attempts to work in Zarzuela, his discovery of Spanish Nationalist composer Felipe Pedrell and study with him in 1902-04, all leading to La Vida Breve, which took on its final form in 1913.

It is a highlight of DeFalla's compositional career and deserves to be more widely heard. This performance brings out all the magic. I do very much recommend it.