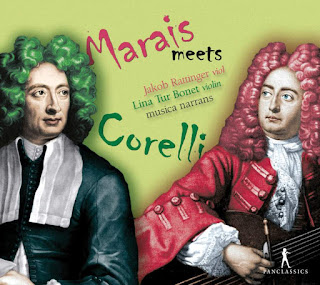 The moment we get complacent about the musical past, we need to hear painstaking and artistically endowed performances on period instruments, so we can remember that the past was different, so that the music sounded  different, that local musics were no less ethnic then and there than everywhere else, that one way or another everybody was historically and culturally unique yet relates to our present as pages in the same book? Recordings that remind us of such things cannot but enrich our vision of the human arts and music. So on the recording Marais Meets Corelli (Pan Classics 10395) we get that uncanny feeling of the presence of the past, that everything in the reconstructed Baroque was neither fish nor fowl, but itself and that much, very much indeed.

We have chamber music on this album of a very high order, featuring the viola da gamba and violin accompanied by baroque guitar, theorbo and harpsichord. The instruments understandably are period ones with the appropriate bows and strings of the time to make that incredibly rich, sweet, vibrant tone. Jakob Rattinger is an excellent gamba exponent and is the principal supplier of direction for this, the Ensemble Musica Narrans. Lina Tur Boney is the talented violinist on the recording.

The extraordinary timbral texture of the ensemble here, the richly resonant swells of the gamba and the baroque violin, in conjunction with the beautiful distinctiveness of the continuo, all this is wonderful to hear and some of my favorite music in truth. Lina on violin and Jakob on the viola da gamba are excellent exponents!

The works on the program have that folksy melodiousness along with the Baroque interplay which sounds so distinctively blended with these original instruments.  The cover may look like a Baroque Crosby and Stills in search of Nash and it most certainly amuses! But then we get glorious works that feature the gamba, by Tobias Hume, Antoine Forqueray and Marin Marais, then two sonatas for violin--by Corelli and von Biber, and then music that features both instruments by Marais, Jacques Morel and then with the two soloists doing select variations on the famed "La Folia" as invented by Marais and Corelli followed by some improvisations. The "Folly" was a favored theme for variations in the day and one can feel the attraction here. F. Couperin comes to mind as doing a nice set as well and you might want to find them after these have done their job with you.

In many ways the program represents the foment of competition between the violin and the viola da gamba for the favor of the public as the virtuoso solo instrument of choice. Corelli represented the violin and Marais the gamba. Before the violin won out there were the two strains, two musical strivings that we hear so readily and beautifully on this program.

Those who may not be familiar with how things sounded in chamber worlds then will find this a real ear opener. Those who already know and love the music of the period in authentic instrumental garb will nonetheless doubtless find joy in this album as I have.

Heartily recommended. Do hear this!
Posted by Grego Applegate Edwards at 8:13 AM