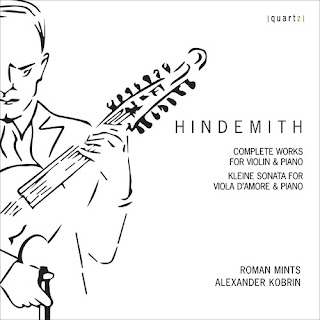 If you did not live with the music for a while, you might think superficially that certain genres by certain composers were all the same. I mean for example Baroque chamber music of a certain configuration, by, say Bach, or for that matter Hindemith's Complete Works for Violin and Piano (Quartz 2132), which is in a very striking new performance set by Roman Mints on violin and Alexander Kobrin on piano, and includes also the Kleine Sonata for Viola d'Amore & Piano.

And it is perhaps telling that this aspect of Hindemith is in some ways comparable to Bach in certain chamber modes. Both set out not for novelty, for they know that they would work in a particular niche, something they long established in years before, or in other words it was not about upending the form they took as part of the expression they looked for. In this way the Modern element in Hindemith chamber modes was built up out of previous decisions`he had made about where he wanted to be. And so we hear chronologically the music he produced for the piano and violin or viola d'amore from 1918 through 1939, including sonatas in E Flat, D, E, and C, then also the "Kleine Sonate," the "Trauermusik," and the "Meditation from the Ballet 'Nobilissima Visone.'"

It is all intricately worked-out line and harmony, with quasi-contrapuntal ornate filigree lace fragility or burlap robust "there-ness" that Mints and Kobrin take to readily and spectacularly. The violinist talks in the liners about a special affinity he developed for Hindemith's Sonata in D, the sheet music which his mother found apparently in a used bookstore for Roman to play in the Soviet days, when Mints was first starting out. He took to it and it made an impression on him which was to remain some thirty years later when this complete oeuvre was recorded.

The affinity is apparent in the sincerity and concentrated drive Mints shows throughout and indeed, Kobrin too plays it all with a tempered passion that seems just right for the music, the all of it.

Is this music still too "advanced," too complex for audiences even today? Mints wonders this in the liners. That is true if it is true of virtually all works that are self-consciously "Modern" you might say. None of this music is a happy and glib romp into a humoresquely inane field of verdure, certainly. But then if you look for that you probably do not read this blogsite, right? In any event I would most certainly recommend this volume as an introduction and an affirmation to the importance of Paul Hindemith in chamber territory. There too is the works for viola as I covered some weeks ago, (type his name into the search box above for that) and then of course there are the whole series of other chamber works Hindemith wrote for diverse instruments, from tuba to heckelphone and beyond. Hear them too if you can.

This edition of the complete violin-piano works is masterfully done. The music is worth many hours of your time, if you want to explore some somewhat neglected fare from the Early Modern period. Listen.


Posted by Grego Applegate Edwards at 8:49 AM