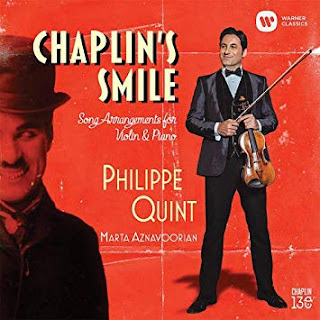 Here in real time yesterday marked the birthday of Charlie Chaplin. Most everyone knows and probably loves Charlie Chaplin's movies. Perhaps less of us know that he was a prolific songwriter, with scores of them. Most (at least those as old as I am) recognize the song "Smile," but how many know that it was one of Charlie's songs? It was. Violinist Philippe Quint gives us a happy and revealing program of Chaplin's love songs on an album entitled Chaplin's Smile (Warner Classics 2-585381). He and pianist Marta Aznavoorian, with the help of Charles Coleman, put these violin-piano arrangements in order and the two artists work in delightful tandem together throughout in realizing them for us.

Thirteen Chaplin songs grace this collection, some perhaps you might recognize, others not, yet all brightly whimsical and in their own way melodically vibrant, all as on-the-surface casually brilliant as was Chaplin the comedic figure. Phillippe's violin work is beautifully agile and shows the dancingly Pop-accessible side of the era from which the music came. Marta is completely at ease and lucid in the context of this music and the two come across as artfully "artless" if that makes sense, just like Chaplin was in his many roles and films.

Joshua Bell joins the pair with a bit of seconding for several of the songs and all that goes well, very well indeed. And on his own or net, Quint shows us a charmingly Gypsy-vernacular sort of expressive demeanor for the outing in ways that stand out. Any who love the art of the violin will find this one rather hard to resist, I would warrant.

This in fact is at times rather Kreiserlesque as it strikes me--strongly accessible yet filled with the sort of brilliance it takes true talent and application to achieve. It is undoubtedly the case that much of the genius of Chaplin somehow translates into the musical idiom on these songs. The works have that humanity in them that Chaplin was so full of, always. And if these are straightforward tunes, that is consistent with his way, after all.

It is music of cosmopolitan polish yet disarming in its thoroughgoing naivete. The man who brought us "Modern Times" perhaps endears in part in his refusal to be Modern in the capital /M/ sense. Admittedly there is a jazzy ragtime-y feel underlying much of this. Yet his art is a plea for a timelessness that in the end is also very much something to date him as of his time. Complex simplicity, this.

And so this is the sort of music that might appeal to anybody and everybody. I cannot say it does not appeal to me! Recommended. Quint is a marvel.
Posted by Grego Applegate Edwards at 1:00 PM